Headcases was an ITV satirical animation show based on current affairs. It employed the same satirical style as Spitting Image, 2DTV and Bo Selecta! but using 3D animation created by UK Visual Effects and animation house Red Vision. Red Vision evolved a series of unique production techniques and a sophisticated animation pipeline to deliver the weekly topical elements of the series to hitherto impossible deadlines. The programmes first series began on 6 April 2008, with weekly episodes until 11 May 2008, airing on Sundays at 10 pm. A seventh episode was televised on Friday, 30 May at 10:30 pm, and an eighth at 10 pm on Sunday, 15 June. The show included celebrities, politicians and members of the British Royal Family in their animated form, taking a role in sketches including scenarios from their own topical issues. The shows name comes from the fact that all the subjects caricatured faces are out of scale with the rest of their bodies. 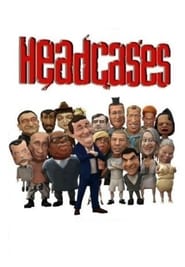