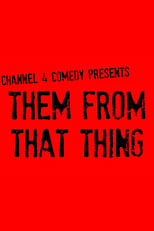 Them From That Thing

Them From That Thing is a sketch show featuring a host of Channel 4 comedy stars. The series features Blake Harrison (The Inbetweeners), Kayvan Novak (Facejacker), Sally Phillips (Smack The Pony) and Morgana Robinson (Very Important People) alongside with a host of famous faces from the world of drama. Set in the modern world where serious characters say and do very stupid things, Them From That Thing combines the look and feel of great British drama with a silly and slightly unhinged comic sensibility.

Similar TV Shows to Them From That Thing

Nick Cannon and an A-list celebrity lead a team of improv comedians as they compete against each other.
TV Show Star Rating : 7.3  Read More

30 Rock is an American television comedy series that ran on NBC from October 11, 2006, to January 31, 2013, and was created by Tina Fey. The series, which is loosely based on Fey's experiences as head writer for Saturday Night Live, takes place behind the scenes of a fictional live sketch comedy series depicted as airing on NBC. The series' name refers to 30 Rockefeller Plaza in New York City, the address of the GE Building, in which the NBC Studios are located.
TV Show Star Rating : 7.2  Read More

A late-night live television sketch comedy and variety show created by Lorne Michaels. The show's comedy sketches, which parody contemporary culture and politics, are performed by a large and varying cast of repertory and newer cast members. Each episode is hosted by a celebrity guest, who usually delivers an opening monologue and performs in sketches with the cast, and features performances by a musical guest.
TV Show Star Rating : 6.6  Read More

The Rising of The Shield Hero

Iwatani Naofumi was summoned into a parallel world along with 3 other people to become the world's Heroes. Each of the heroes respectively equipped with their own legendary equipment when summoned, Naofumi received the Legendary Shield as his weapon. Due to Naofumi's lack of charisma and experience he's labeled as the weakest, only to end up betrayed, falsely accused, and robbed by on the third day of adventure. Shunned by everyone from the king to peasants, Naofumi's thoughts were filled with nothing but vengeance and hatred. Thus, his destiny in a parallel World begins...
TV Show Star Rating : 8.5  Read More

Little Britain is a British character-based comedy sketch show which was first broadcast on BBC radio and then turned into a television show. It was written by comic duo David Walliams and Matt Lucas. The show's title is an amalgamation of the terms 'Little England' and 'Great Britain', and is also the name of a Victorian neighbourhood and modern street in London. The show comprises sketches involving exaggerated parodies of British people from all walks of life in various situations familiar to the British. These sketches are presented to the viewer together with narration in a manner which suggests that the programme is a guide—aimed at non-British people—to the ways of life of various classes of British society. Despite the narrator's description of great British institutions, the comedy is derived from the British audience's self-deprecating understanding of either themselves or people known to them.
TV Show Star Rating : 7.2  Read More

Mr. Show with Bob and David

Mr. Show with Bob and David is an American sketch comedy series starring and hosted by Saturday Night Live writer/actor Bob Odenkirk and stand up comedian/actor David Cross. It aired on HBO from November 3, 1995 to December 28, 1998. Cross and Odenkirk introduced most episodes as heightened versions of themselves, before transitioning to a mixture of live sketches and pre-taped segments. The show featured a number of alternative comedians as both cast members and writers, including Sarah Silverman, Paul F. Tompkins, Jack Black, Tom Kenny, Mary Lynn Rajskub, Brian Posehn, Jerry Minor, Scott Aukerman, and Dino Stamatopoulos. It was nominated for four Primetime Emmy Awards, as well as a Golden Satellite Award.
TV Show Star Rating : 8  Read More