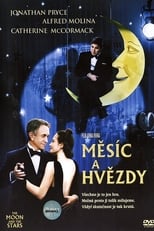 The Moon and the Stars

1939: Rome stands on the brink of World War II. In the midst of this political and social tension famed producer Davide Rieta is making a major film. The two lead actors, the German woman Kristina Baumgarten and the English man James Clavel ace each others initial antagonism and eventually fall in love. Meanwhile the fascist police are looking for an excuse to arrest the Jewish filmmaker and any other potential "troublemakers." The producer and his crew decide to make one final extraordinary effort to complete the film - against all odds.

Similar Movies to The Moon and the Stars

The story of the miraculous evacuation of Allied soldiers from Belgium, Britain, Canada and France, who were cut off and surrounded by the German army from the beaches and harbour of Dunkirk between May 26th and June 4th 1940 during World War II.
Movie Star Rating : 7.4  Read More

Fourth-generation Army Col. William McNamara is imprisoned in a brutal German POW camp. Still, as the senior-ranking American officer, he commands his fellow inmates, keeping a sense of honor alive in a place where honor is easy to destroy, all under the dangerous eye of the Luftwafe vetran Col. Wilhelm Visser. Never giving up the fight to win the war, McNamara is silently planning, waiting for his moment to strike back at the enemy. A murder in the camp gives him the chance to set a risky plan in motion. With a court martial to keep Visser and the Germans distracted, McNamara orchestrates a cunning scheme to escape and destroy a nearby munitions plant, enlisting the unwitting help of young Lt. Tommy Hart. Together with his men, McNamara uses a hero's resolve to carry out his mission, ultimately forced to weigh the value of his life against the good of his country.
Movie Star Rating : 6.3  Read More

The lifelong friendship between Rafe McCawley and Danny Walker is put to the ultimate test when the two ace fighter pilots become entangled in a love triangle with beautiful Naval nurse Evelyn Johnson. But the rivalry between the friends-turned-foes is immediately put on hold when they find themselves at the center of Japan's devastating attack on Pearl Harbor on Dec. 7, 1941.
Movie Star Rating : 6.9  Read More

In 1942, an intelligence officer in North Africa encounters a female French Resistance fighter on a deadly mission behind enemy lines. When they reunite in London, their relationship is tested by the pressures of war.
Movie Star Rating : 6.7  Read More

A military veteran goes on a journey into the future, where he can foresee his death and is left with questions that could save his life and those he loves.
Movie Star Rating : 6.9  Read More

The retelling of June 6, 1944, from the perspectives of the Germans, US, British, Canadians, and the Free French. Marshall Erwin Rommel, touring the defenses being established as part of the Reich's Atlantic Wall, notes to his officers that when the Allied invasion comes they must be stopped on the beach. "For the Allies as well as the Germans, it will be the longest day"
Movie Star Rating : 7.6  Read More

The lives of a young couple intertwine with a much older man as he reflects back on a lost love while he's trapped in an automobile crash.
Movie Star Rating : 7.5  Read More