Return of the Jedi

As Rebel leaders map their strategy for an all-out attack on the Emperors newer, bigger Death Star. Han Solo remains frozen in the cavernous desert fortress of Jabba the Hutt, the most loathsome outlaw in the universe, who is also keeping Princess Leia as a slave girl. Now a master of the Force, Luke Skywalker rescues his friends, but he cannot become a true Jedi Knight until he wages his own crucial battle against Darth Vader, who has sworn to win Luke over to the dark side of the Force. 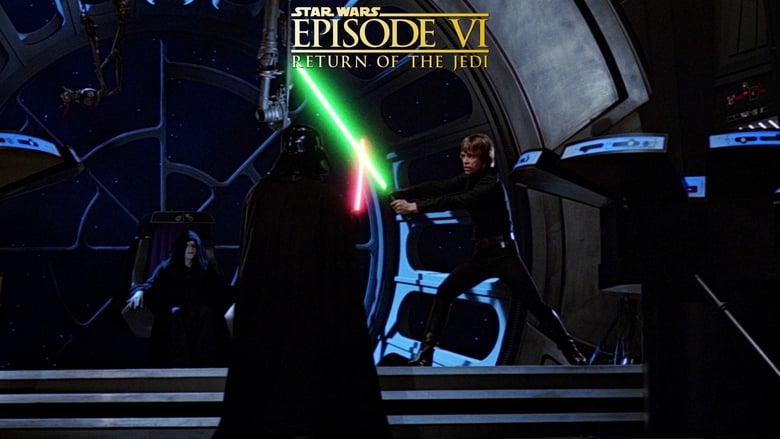 Similar Movies to Return of the Jedi

The epic saga continues as Luke Skywalker, in hopes of defeating the evil Galactic Empire, learns the ways of the Jedi from aging master Yoda. But Darth Vader is more determined than ever to capture Luke. Meanwhile, rebel leader Princess Leia, cocky Han Solo, Chewbacca, and droids C-3PO and R2-D2 are thrown into various stages of capture, betrayal and despair.
Movie Star Rating : 8.3  Read More

A rogue band of resistance fighters unite for a mission to steal the Death Star plans and bring a new hope to the galaxy.
Movie Star Rating : 7.4  Read More

Star Wreck: In the Pirkinning

Star Wreck: In the Pirkinning begins with Captain James B. Pirk of the starship Kickstart shipwrecked on the 21st century Earth with his crew. Originally from the distant future, Pirk and his crew traveled back in time to save the Earth from hostile aliens, but lost their ship and became stranded. Pirk's daily routine consists mainly of stuffing his face at the local fast food restaurant, and he is finding it difficult to convince the ladies he is, in fact, an intergalactic space hero from the future. As the prospects for humanity's conquest of space look increasingly bleaker, Pirk comes up with a questionable plan to save mankind's future...
Movie Star Rating : 6.6  Read More

Thirty years after defeating the Galactic Empire, Han Solo and his allies face a new threat from the evil Kylo Ren and his army of Stormtroopers.
Movie Star Rating : 7.4  Read More

Princess Leia is captured and held hostage by the evil Imperial forces in their effort to take over the galactic Empire. Venturesome Luke Skywalker and dashing captain Han Solo team together with the loveable robot duo R2-D2 and C-3PO to rescue the beautiful princess and restore peace and justice in the Empire.
Movie Star Rating : 8.1  Read More

The Chronicles of Narnia: Prince Caspian

One year after their incredible adventures in the Lion, the Witch and the Wardrobe, Peter, Edmund, Lucy and Susan Pevensie return to Narnia to aid a young prince whose life has been threatened by the evil King Miraz. Now, with the help of a colorful cast of new characters, including Trufflehunter the badger and Nikabrik the dwarf, the Pevensie clan embarks on an incredible quest to ensure that Narnia is returned to its rightful heir.
Movie Star Rating : 6.3  Read More

Bound for a remote planet on the far side of the galaxy, the crew of the colony ship 'Covenant' discovers what is thought to be an uncharted paradise, but is actually a dark, dangerous world – which has its sole inhabitant the 'synthetic', David, survivor of the doomed Prometheus expedition.
Movie Star Rating : 5.8  Read More

Set in the future, the story follows a young soldier named Johnny Rico and his exploits in the Mobile Infantry. Rico's military career progresses from recruit to non-commissioned officer and finally to officer against the backdrop of an interstellar war between mankind and an arachnoid species known as "the Bugs".
Movie Star Rating : 6.7  Read More

During a space voyage, four scientists are altered by cosmic rays: Reed Richards gains the ability to stretch his body; Sue Storm can become invisible; Johnny Storm controls fire; and Ben Grimm is turned into a super-strong … thing. Together, these "Fantastic Four" must now thwart the evil plans of Dr. Doom and save the world from certain destruction.
Movie Star Rating : 5.6  Read More

Ten years after the invasion of Naboo, the galaxy is on the brink of civil war. Under the leadership of a renegade Jedi named Count Dooku, thousands of solar systems threaten to break away from the Galactic Republic. When an assassination attempt is made on Senator Padmé Amidala, the former Queen of Naboo, twenty-year-old Jedi apprentice Anakin Skywalker is assigned to protect her. In the course of his mission, Anakin discovers his love for Padmé as well as his own darker side. Soon, Anakin, Padmé, and Obi-Wan Kenobi are drawn into the heart of the Separatist movement and the beginning of the Clone Wars.
Movie Star Rating : 6.4  Read More