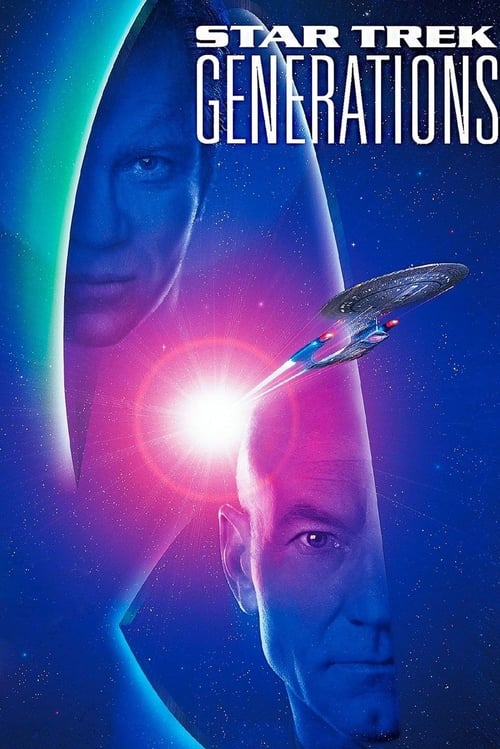 Plot : Captain Jean-Luc Picard and the crew of the Enterprise-D find themselves at odds with the renegade scientist Soran who is destroying entire star systems. Only one man can help Picard stop Soran's scheme...and he's been dead for seventy-eight years. 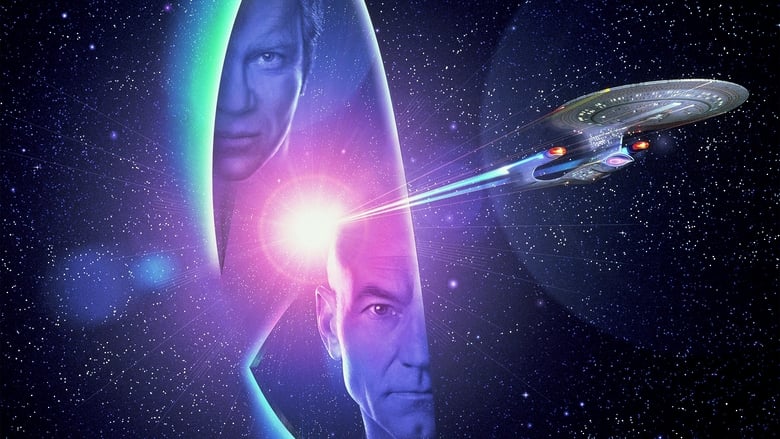 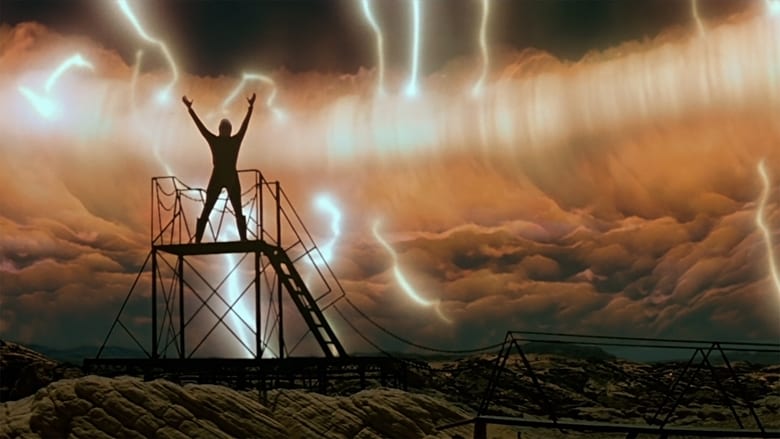 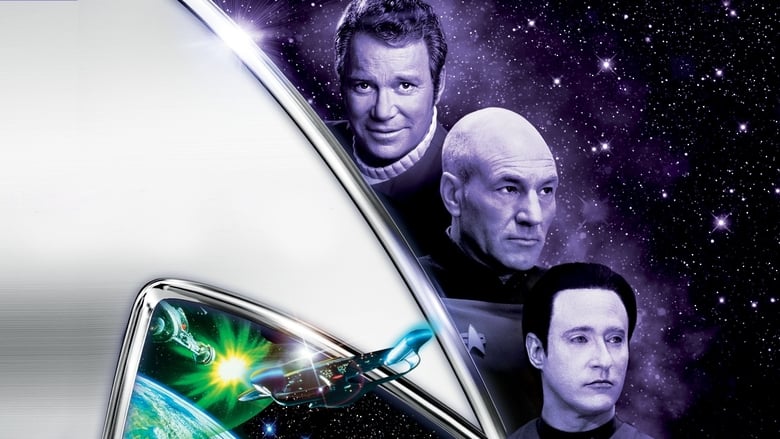 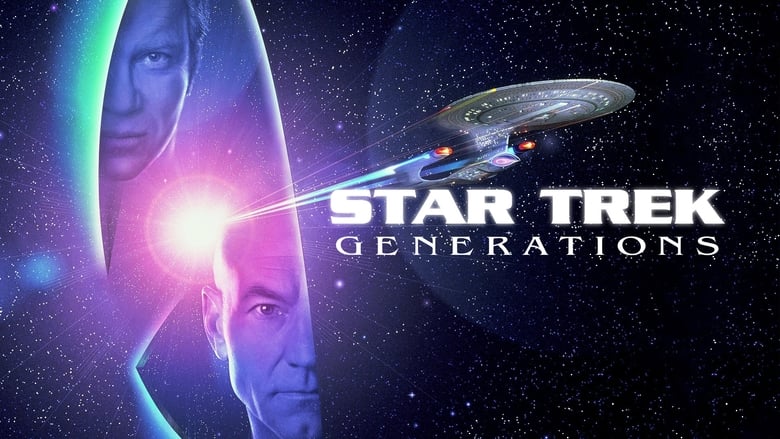 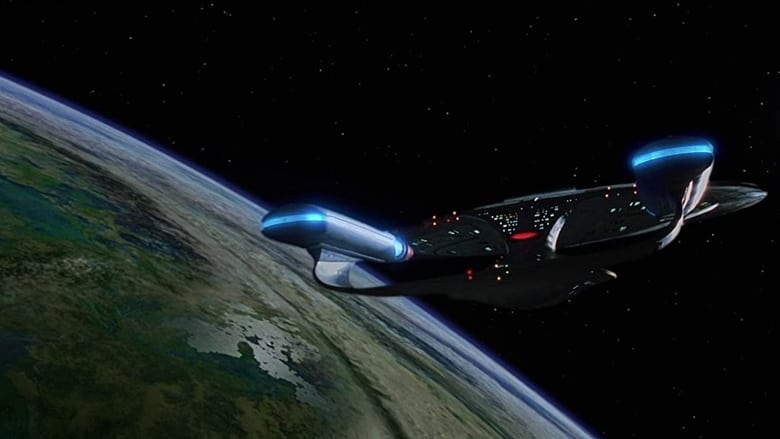 _**Ambitious and High-Concept Sci-Fi (for Grown-Ups only)**_ I can see WHY some don't like "Generations" (1994) or don't 'get' it: This seventh Star Trek film has some (false) plot holes and some things aren't spelled-out or explained very well (So what? Doesn't mystery intrinsically come with the territory of space adventure?); plus the story is a bit convoluted, particularly for those not familiar with Star Trek up to this point, both generations. Regardless, "Generations" is ambitious, high-concept sci-fi of the highest order; it leaves the viewer with many interesting questions to ponder long afterwards. Although the Nexus has been criticized as a mere gimmick to get Kirk and Picard together, I find the concept utterly fascinating: No matter how much we want it, an illusory paradise is just that, an illusion. As far as I'm concerned, the concept of the Nexus and its implementation into the storyline is nothing short of brilliant. Who created the Nexus? Why, who else but the Talosians, the 'antagonists' of Trek's very first episode, "The Cage"! Think about it. Besides this, there are multiple highlights (some SPOILERS follow): The usual Trek humor, Data's amusing experiences with the emotion chip, Malcolm McDowell's outstanding performance as the Soran, his believable obsession and justifications, B'Etor & Lursa and their "wild bunch" Klingons, the startling obliteration of them and their vessel, the thrilling crash-landing of the Enterprise-D, the meeting of Kirk and Picard in the Nexus, the final showdown with Soran and Kirk's death. Needless to say, "Generations" does far more than offer mere juvenile space battles. BIGGEST PLOT HOLE (OR MAYBE NOT): Picard's purpose in leaving the Nexus is to stop Soran from annihilating the Enerprise-D crew and the entire Veridian solar system, including the 230 million people that live on Veridian IV. Since Picard can leave the Nexus and "go anywhere any time," as Guinan pointed out earlier, why go to Veridian III about A MINUTE before Soran launches his rocket? Why not go back to when Soran was a guest on the Enterprise-D and apprehend him then and there? Writer Ronald D. Moore defended Picard's decision on the grounds that he didn't want to risk the dangerous and unexpected consequences that can occur when tampering with the timeline; hence, his journey back in time from the Nexus is only a matter of a minute or so. It's a good explanation. Speaking of explanations, some have criticized the fact that Guinan is simultaneously present in the real world and in the Nexus. How could this be? It's simple: It is repeatedly established that the reality experienced in the Nexus is not real; one experiences what they desire in the Nexus, not what is necessarily real. For instance, Picard has no children in the real world, but because he DESIRED to have them he was able to experience them in the Nexus. Hence, the 'Guinan' portrayed in the Nexus may walk, talk and act precisely like Guinan, but she's not real. She's only there because Picard desires her to be there for the purpose of explaining the nature of the Nexus. That said, many of the people in the Nexus are real, like Picard and Kirk. COMMENTARY ON THE NEXUS: Although the Nexus should simply be taken at face value as a strange space phenomenon (likely created by the Talosians), you can also regard it as an analogy. At first glance the viewer might get the impression that the Nexus is a type of heaven, but this can't be so since it is repeatedly emphasized in the film that the people and events experienced in the Nexus are NOT real (for the most part). 'Heaven,' a term theologians and ministers traditionally use to refer to the eternal abode of the redeemed (technically referred to as "the new heavens and new earth" in the bible, as shown in 2 Peter 3:13), is always depicted as real in the bible, not an illusory paradise. If the Nexus is not analogous of heaven, what could it be a type of? The Nexus corresponds to any addiction a person "tastes" and embraces to escape reality (e.g. pipe dreams, drugs, alcohol, computer games, TV, porn, fishing, shopping, golf, etc.). Some, like Soran, are unable to flee its clutches and waste their lives and talents OBSESSED by it. Others, like Picard and Kirk, are able to see the truth and escape; they therefore "make a difference" in real life. BOTTOM LINE: This "passing-of-the-torch" installment requires an attention span and an appreciation for high-concept sci-fi; it will likely bore those for whom Star Trek only means neato spacecrafts and superficial space dogfights (don't get me wrong, they each have their place in Trek). "Generations" has the courage to make bold changes -- killing off an iconic character, and fairly prominent support characters as well, not to mention destroying the Enterprise-D. In short, "Generations" is science-fiction for grown-ups and youth with advanced cerebral development. All others should stick with juvenile space fantasy flicks (giggle). The film runs 1 hour, 57 minutes. GRADE: A

I'll be honest, I really hated Star Trek The Motion Picture. I mean, I REALLY hated it and I am a Star Trek fan... ... so it's sort of fitting that I hate Generations as well. I mean, it doesn't do the first generation or the Next Generation justice at all does it? Kirk shouldn't have been in it. The OG Enterprise crew shouldn't have been in it. It felt like it robbed TNG of their first outing on the big screen while insulting the original crew of the Enterprise.

When the crew of the Enterprise is called back home, they find an unstoppable force of terror from within their own organization has detonated the fleet and everything it stands for, leaving our world in a state of crisis. With a personal score to settle, Captain Kirk leads a manhunt to a war-zone world to capture a one man weapon of mass destruction. As our heroes are propelled into an epic chess game of life and death, love will be challenged, friendships will be torn apart, and sacrifices must be made for the only family Kirk has left: his crew.
Movie Star Rating : 7.3  Read More

A team of explorers discover a clue to the origins of mankind on Earth, leading them on a journey to the darkest corners of the universe. There, they must fight a terrifying battle to save the future of the human race.
Movie Star Rating : 6.5  Read More

How to Train Your Dragon 2

Five years have passed since Hiccup and Toothless united the dragons and Vikings of Berk. Now, they spend their time charting unmapped territories. During one of their adventures, the pair discover a secret cave that houses hundreds of wild dragons - and a mysterious dragon rider who turns out to be Hiccup's mother, Valka. Hiccup and Toothless then find themselves at the center of a battle to protect Berk from a power-hungry warrior named Drago.
Movie Star Rating : 7.7  Read More