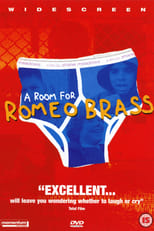 A Room for Romeo Brass

Two twelve-year-old boys, Romeo and Gavin, undergo an extraordinary test of character and friendship when Morell, a naive but eccentric and dangerous stranger, comes between them. Morell befriends with the two boys and later asks them to help him pursue Romeos beautiful elder sister. He gradually becomes more violent after she rejects him.

Similar Movies to A Room for Romeo Brass

The Edge of Seventeen

During a championship baseball match, the three brothers hear that their grandfather in Japan is in trouble, and head out to help him, conceding the match. When they arrive in Japan, they must use all their powers to defend him against his ancient enemy, who has returned to exact revenge.
Movie Star Rating : 4.7  Read More

Furious that her late father only willed her his gloomy-looking mansion rather than his millions, Carrigan Crittenden is ready to burn the place to the ground when she discovers a map to a treasure hidden in the house. But when she enters the rickety mansion to seek her claim, she is frightened away by a wicked wave of ghosts. Determined to get her hands on this hidden fortune, she hires afterlife therapist Dr. James Harvey to exorcise the ghosts from the mansion. Harvey and his daughter Kat move in, and soon Kat meets Casper, the ghost of a young boy who's "the friendliest ghost you know." But not so friendly are Casper's uncles-Stretch, Fatso and Stinkie-who are determined to drive all "fleshies" away.
Movie Star Rating : 6  Read More

Recent MIT grad Matt Franklin (Topher Grace) should be well on his way to a successful career at a Fortune 500 company, but instead, he rebels against maturity by taking a job at a video store. Matt rethinks his position when his unrequited high-school crush, Tori (Teresa Palmer), walks in and invites him to an end-of-summer party. With the help of his twin sister (Anna Faris) and his best friend (Dan Fogler), Matt hatches a plan to change the course of his life.
Movie Star Rating : 6.1  Read More

Longtime friends Ronny and Nick are partners in an auto-design firm. They are hard at work on a presentation for a dream project that would really launch their company. Then Ronny spots Nick's wife out with another man, and in the process of investigating the possible affair, he learns that Nick has a few secrets of his own. As the presentation nears, Ronny agonizes over what might happen if the truth gets out.
Movie Star Rating : 5.2  Read More

Me and Earl and the Dying Girl

Greg is coasting through senior year of high school as anonymously as possible, avoiding social interactions like the plague while secretly making spirited, bizarre films with Earl, his only friend. But both his anonymity and friendship threaten to unravel when his mother forces him to befriend a classmate with leukemia.
Movie Star Rating : 7.6  Read More

Shouya Ishida starts bullying the new girl in class, Shouko Nishimiya, because she is deaf. But as the teasing continues, the rest of the class starts to turn on Shouya for his lack of compassion. When they leave elementary school, Shouko and Shouya do not speak to each other again... until an older, wiser Shouya, tormented by his past behaviour, decides he must see Shouko once more. He wants to atone for his sins, but is it already too late...?
Movie Star Rating : 8.3  Read More

A high school senior drives cross-country with his best friends to hook up with a babe he met online.
Movie Star Rating : 6  Read More

When the popular, restless Landon Carter is forced to participate in the school drama production he falls in love with Jamie Sullivan, the daughter of the town's minister. Jamie has a "to-do" list for her life and also a very big secret she must keep from Landon.
Movie Star Rating : 7.5  Read More

Bambi's tale unfolds from season to season as the young prince of the forest learns about life, love, and friends.
Movie Star Rating : 6.8  Read More