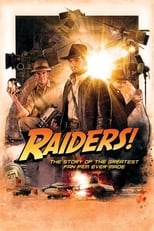 Raiders!: The Story of the Greatest Fan Film Ever Made

In 1982, three 11 year-olds in Mississippi set out to remake their favorite film: Raiders of the Lost Ark. It took seven turbulent years that tested the limits of their friendship and nearly burned down their mothers house. By the end, they had completed every scene except one... the explosive airplane scene. 30 years later, they attempt to finally realize their childhood dream by building a replica of the 75 foot "Flying Wing" plane from Raiders in a mud pit in the backwoods of Mississippi... and then blow it up! This is the story behind the making of what is known as "the greatest fan film ever made."

Similar Movies to Raiders!: The Story of the Greatest Fan Film Ever Made

Three wealthy children's parents are killed in a fire. When they are sent to a distant relative, they find out that he is plotting to kill them and seize their fortune.
Movie Star Rating : 6.809  Read More

During a summer of friendship and adventure, one boy becomes a part of the gang, nine boys become a team and their leader becomes a legend by confronting the terrifying mystery beyond the right field wall.
Movie Star Rating : 7.499  Read More

When Dr. Henry Jones Sr. suddenly goes missing while pursuing the Holy Grail, eminent archaeologist Indiana must team up with Marcus Brody, Sallah and Elsa Schneider to follow in his father's footsteps and stop the Nazis from recovering the power of eternal life.
Movie Star Rating : 7.805  Read More

Set during the Cold War, the Soviets—led by sword-wielding Irina Spalko—are in search of a crystal skull which has supernatural powers related to a mystical Lost City of Gold. Indy is coerced to head to Peru at the behest of a young man whose friend—and Indy's colleague—Professor Oxley has been captured for his knowledge of the skull's whereabouts.
Movie Star Rating : 5.946  Read More

When Casper's been being friendly lately even when playing with a boy named Jimmy, Kibosh: The King of the Underworld has Casper enrolled into a Scare School headed by the two-headed headmaster Alder and Dash. He befriends Ra, a mummy with unraveling issues and Mantha, a zombie girl who keeps falling apart. When Casper discovers the two-headed headmaster's plot to use a petrification potion to turn Kibosh into stone and take over the Underworld and Deedstown, he and his new friends must stop him.
Movie Star Rating : 4.942  Read More

Villainous Gru lives up to his reputation as a despicable, deplorable and downright unlikable guy when he hatches a plan to steal the moon from the sky. But he has a tough time staying on task after three orphans land in his care.
Movie Star Rating : 7.218  Read More

Scooby-Doo and those "meddling kids" Shaggy, Fred, Daphne and Velma are back in this all-new original movie! Velma discovers she's inherited her great-great-uncle Dr. Von Dinkenstein’s cursed castle in the terrifying town of Transylvania…Pennsylvania, that is. Just when the Gang persuades Velma to go claim her inheritance, the ghost of Dinkenstein Castle blows up the Mystery Machine as a warning! Now the Crew must spring back into action, but this time it's personal! Who's responsible for the Dinkenstein monster? What family secret has Velma been hiding? Will Fred recover from the loss of his beloved Mystery Machine? Can any helpless snack survive Scooby and Shaggy's monster-sized appetites? This Scooby-Doo adventure has enough spooky fun to make the whole family come alive!
Movie Star Rating : 7.364  Read More

Skipper, Kowalski, Rico and Private join forces with undercover organization The North Wind to stop the villainous Dr. Octavius Brine from destroying the world as we know it.
Movie Star Rating : 6.497  Read More

Growing up can be a bumpy road, and it's no exception for Riley, who is uprooted from her Midwest life when her father starts a new job in San Francisco. Riley's guiding emotions— Joy, Fear, Anger, Disgust and Sadness—live in Headquarters, the control centre inside Riley's mind, where they help advise her through everyday life and tries to keep things positive, but the emotions conflict on how best to navigate a new city, house and school.
Movie Star Rating : 7.937  Read More

Tom and Jerry: The Fast and the Furry

After being evicted from their old house by Tom's owner for causing major damage, cat and mouse Tom and Jerry enter a race entitled the "Fabulous Super Race" to win a mansion.
Movie Star Rating : 6.9  Read More

The Yorkshire Auction House - (May 24th)