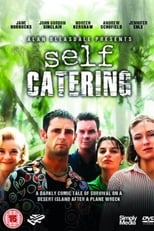 Alan Bleasdales star-studded comedy/drama about the lives of five plane crash survivors stranded together on a deserted island. Starring Jane Horrocks, John Gordon Sinclair, Jennifer Ehle, Noreen Kershaw and Andrew Schofield. When a plane crashes, five very different survivors find themselves trapped together on an apparently deserted, idyllic island. Everyone else has been killed except for the five survivors that emerge from the wreckage, one unconscious. One of these people, a dedicated film-lover, makes light of their perilous situation by comparing it to countless movie plots. This leads the survivors to start their lives afresh, taking on the names and personalities of famous movie stars to cope in their interactions with each other, which leads to many hilarious and erotic encounters.

Similar Movies to Self Catering