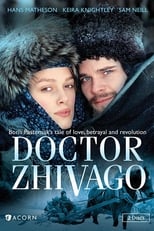 Doctor Zhivago is a 2002 British television miniseries directed by Giacomo Campiotti and starring Hans Matheson, Keira Knightley and Sam Neill. The teleplay by Andrew Davies is based on the 1957 novel of the same title by Boris Pasternak. The serial is the second English-language screen adaptation of the book, following the 1965 feature film. It was produced by Granada Television, with co-funding from the American PBS station WGBH Boston and the German company Evision. It was first broadcast on ITV in the United Kingdom, beginning on 24 November 2002. In the United States, it aired as part of Masterpiece Theatre on 2 and 9 November 2003.

A young doctor who has graduated at the top of his class from the Moscow State University of Medicine and Dentistry is thrust out into an isolated and impoverished country side as the village's only doctor. As he learns to adapt to his new lifestyle, he develops a morphine addiction to stay his sanity while realizing what being a doctor in the real world means.
TV Show Star Rating : 6.8  Read More

Two friends, one northern and one southern, struggle to maintain their friendship as events build towards the American Civil War.
TV Show Star Rating : 7.2  Read More

Dexter is an American television drama series. The series centers on Dexter Morgan, a blood spatter pattern analyst for 'Miami Metro Police Department' who also leads a secret life as a serial killer, hunting down criminals who have slipped through the cracks of justice.
TV Show Star Rating : 7.9  Read More

True Blood is an American television drama series created and produced by Alan Ball. It is based on The Southern Vampire Mysteries series of novels by Charlaine Harris, detailing the co-existence of vampires and humans in Bon Temps, a fictional, small town in northwestern Louisiana. The series centers on the adventures of Sookie Stackhouse, a telepathic waitress with an otherworldly quality.
TV Show Star Rating : 7.1  Read More