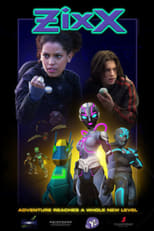 Zixx is a Canadian television series that airs on YTV. This series was developed by Savi Media and The Nightingale Company with YTV Original Productions. The series was created by Jeff Hirschfield. The show consists of a mixture of live action "real world" sequences interspersed with computer-generated scenes set inside a virtual realm. In Zixx Level One, Elliott Digital used a game engine to create the animation, the first time this was done for a television show. For Zixx: Level Two, the production had to move to British Columbia when Thunderbird Films Inc. joined the team. Mainframe Entertainment came on board to do the animation and IDT Entertainment, the company that owns Mainframe, took over distribution of the show. It is the first ever Mainframe series to combine live action with computer animation. The crew would stay for season three.