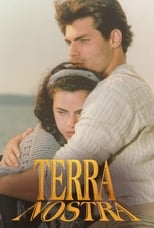 Terra Nostra is a Brazilian telenovela, which was produced by and broadcast on Rede Globo in 1999. The story is set in the late 19th century and takes place at a time when slaves were freed in Brazil and there was a need for workers, especially on the coffee fazendas of Brazil. As a result new laborers were sought and a large number of Italians, looking for a better life, immigrated to Brazil to work there. Unlike many telenovela stories, the characters are not larger than life in "Terra Nostra." Instead, they are like everyday people who make everyday decisions. Consequently, the viewers can relate to what is happening in the story. "Terra Nostra" was written by Benedito Ruy Barbosa and directed by Jayme Monjardim. Both men are responsible for writing and directing other first-rate stories. The telenovela has many shots of nature and scenery. Musical director, Marcus Viana, puts together a music soundtrack for the telenovela. It is mainly filled with traditional Italian songs that are performed musicians such as Charlotte Church, Caetano Veloso, Zizi Possi, and Jerry Adriani. The soundtrack also includes original instrumental music by Viana, also a musician with experience from making soundtracks for other shows.

The series follows the "untold" story of Leonardo Da Vinci: the genius during his early years in Renaissance Florence. As a 25-year old artist, inventor, swordsman, lover, dreamer and idealist, he struggles to live within the confines of his own reality and time as he begins to not only see the future, but invent it.
TV Show Star Rating : 7.3  Read More

Naz who is a paediatrician loses her baby during pregnancy. Even though her husband wants another baby, she refuses to go through the same thing all over again. She goes to Italy for a conference and meets Ali Nejat there.
TV Show Star Rating : 5.3  Read More

Based on Robert Saviano's bestselling book, this gritty Italian crime drama paints a portrait of the brutal Neapolitan crime organisation the Camorra, as seen through the eyes of Ciro Di Marzo, the obedient and self- confident right-hand man of the clan's godfather, Pietro Savastano.
TV Show Star Rating : 8  Read More

Crash Landing on You

A paragliding mishap drops a South Korean heiress in North Korea - and into the life of an army officer, who decides he will help her hide.
TV Show Star Rating : 8.8  Read More

The adventures of Joanna Beauchamp and her two adult daughters Freya and Ingrid - both of whom unknowingly are their family's next generation of witches - who lead seemingly quiet, uneventful modern day lives in Long Island's secluded seaside town of East Haven. When Freya becomes engaged to a young, wealthy newcomer, a series of events forces Joanna to admit to her daughters they are, in fact, powerful and immortal witches.
TV Show Star Rating : 7.4  Read More

Thou Shalt Not Kill

Stubborn and determined detective Valeria Ferro endeavors to solve the challenging puzzle behind crimes motivated by jealousy, vendettas and repressed anger to seek the truth and justice. All as she struggles with her own demons and the phantoms of her past that come back to life when her mother is released from jail after serving a seventeen-year prison sentence.
TV Show Star Rating : 5.8  Read More

As a major criminal investigation tries to stem the flow of corruption, Italy is poised on the brink of collapse.
TV Show Star Rating : 7.3  Read More

The Social Welfare Agency saves the lives of terminal patients using cybernetic implants. Then it teaches them to kill. After surviving the slaughter of her family, young Henrietta awakens to her new life at the Agency with a rebuilt body and no memory. Teamed with Jose, who is responsible for turning her into the perfect assassin, Henrietta’s been given a second chance—but at what cost?
TV Show Star Rating : 7.5  Read More

Alma Gêmea is a Brazilian telenovela that produced and broadcast by Rede Globo in 2005 and 2006. It was written by Walcyr Carrasco and directed by Jorge Fernando. Although the actors speak Portuguese, the program has been dubbed into other languages and syndicated internationally. It achieved record ratings for the 6 PM timeslot.
TV Show Star Rating : 5  Read More