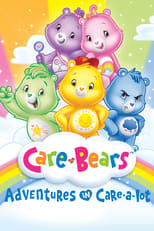 Care Bears: Adventures in Care-a-lot is an animated television series by SD Entertainment, Cookie Jar Entertainment and Shari Lewis Enterprises that premiered on CBSs KEWLopolis line-up from September 15, 2007 to December 6, 2008, and is designed to be an immediate follow up to the movie Care Bears: Oopsy Does It!. It was the third Care Bears television series made and was produced by Sabella Dern Entertainment, the same company that made Care Bears: Oopsy Does It!. It features songs with music by Andy Street and lyrics by Judy Rothman. Along with the other shows in the KEWLopolis block, this series fulfills the federal "E/I" requirements.

Masha is an energetic three-year-old who can’t seem to keep herself out of trouble. Bear is a warm, fatherly figure that does his best to guide his friend and keep her from harm, often ending up the unintended victim of her misadventures.
TV Show Star Rating : 6.887  Read More

Care Bears: Adventures in Care-a-lot is an animated television series by SD Entertainment, Cookie Jar Entertainment and Shari Lewis Enterprises that premiered on CBS's KEWLopolis line-up from September 15, 2007 to December 6, 2008, and is designed to be an immediate follow up to the movie Care Bears: Oopsy Does It!. It was the third Care Bears television series made and was produced by Sabella Dern Entertainment, the same company that made Care Bears: Oopsy Does It!. It features songs with music by Andy Street and lyrics by Judy Rothman. Along with the other shows in the KEWLopolis block, this series fulfills the federal "E/I" requirements.
TV Show Star Rating : 7.3  Read More

Kissyfur is a 1980s animated children's television series which aired on NBC. It was produced by Jean Chalopin & Andy Heyward and created by Phil Mendez for DIC. The series was based on a half-hour NBC prime-time special called Kissyfur: Bear Roots and was followed by three more specials until its Saturday morning debut. The show ran for two seasons. The show follows the adventures of Gus and Kissyfur, a father and son bear duo who had joined the circus. One day on a circus trip, the train they are riding in derails and the bears escape to a new life in the swamps of Paddlecab County. There, they protect the local swamp's inhabitants from the local bumbling alligators Floyd and Jolene. Kissyfur and his father use the skills they have acquired from the human world to create a boat tour business transporting other animals and their products down the river.
TV Show Star Rating : 8.2  Read More

Yogi's Treasure Hunt is a cartoon series first aired in 1985 as part of the weekend/weekday morning programming block, The Funtastic World of Hanna-Barbera. It is the fourth incarnation of Hanna-Barbera's Yogi Bear.
TV Show Star Rating : 6.5  Read More

Yogi's Space Race is a 90-minute Saturday morning cartoon program block and the third incarnation of Hanna-Barbera's Yogi Bear. It ran from September 9 to December 2, 1978 for NBC. The show also appeared on BBC in the United Kingdom. It contained the following four segments: ⁕Yogi's Space Race: intergalactic racing competitions with Yogi Bear, Jabberjaw, Huckleberry Hound and several new characters. ⁕Galaxy Goof-Ups: Yogi Bear, Scare Bear, Huckleberry Hound and Quack-Up as four intergalactic police officers and their leader, Captain Snerdley. ⁕The Buford Files: Buford is a lazy bloodhound who solves mysteries in Fenokee County with two teenagers, Cindy Mae and Woody. ⁕The Galloping Ghost: Nugget Nose is a ghost miner who is a guardian to Wendy and Rita, two teenage cowgirls who work at the Fuddy Dude Ranch. When Galaxy Goof-Ups was given its own half-hour timeslot on November 4, 1978, Yogi's Space Race was reduced to 60 minutes; in early 1979, the "Space Race" segment and Buford and the Galloping Ghost were also spun off in their own half-hour series until September 1979. The series was later aired in reruns on the USA Cartoon Express, Nickelodeon, Cartoon Network, and Boomerang.
TV Show Star Rating : 7.7  Read More

You’ve heard the story of Goldilocks and the Three Bears, but did you hear what happened after the story ended? Goldilocks apologized to Bear and now they’re best friends.
TV Show Star Rating : 5.6  Read More

Yo Yogi! is an animated series and the sixth incarnation of Hanna-Barbera's Yogi Bear. It first aired in 1991 on NBC on Saturday morning.
TV Show Star Rating : 6.3  Read More

Galaxy Goof-Ups is a half-hour Saturday morning animated series produced by Hanna-Barbera Productions which aired on NBC from September 9, 1978 to September 1, 1979. The "Galaxy Goof-Ups" consisted of Yogi Bear, Huckleberry Hound, Scare Bear and Quack-Up as space patrolmen who always goofed-up while on duty and spent most of their time in disco clubs. The show originally aired as a segment on Yogi's Space Race from September 9, 1978 to October 28, 1978. Following the cancellation of Yogi's Space Race, Galaxy Goof-Ups was given its own half-hour timeslot on NBC. The show has been rebroadcast on USA Cartoon Express, Nickelodeon, TNT, Cartoon Network and Boomerang.
TV Show Star Rating : 7  Read More

The series focuses on a rare species of little bears with wings that live in the magical forest in a utopian cooperative community. The little flying bears together with their friends, took on themselves the task to defend their forest from pollution. However, their efforts, very often, are disturbed by two weasels, Skulk and Sammy, which strive to pollute the forest. Every so often the weasels receive help from Slink the snake. The three always strive to find new ways to disturb the harmony of the forest but their plans are destroyed always by the bears. The bears are always attentive to the advices of the old bear, Plato (who is too old to fly) and his friend Ozzy the owl. This cartoon helps children realize the importance of protecting the environment. The series shows the harmful effects of pollution and fires as well as the important role of the ecosystem.
TV Show Star Rating : 6.3  Read More