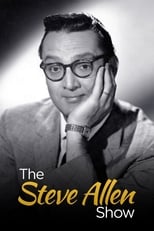 The Steve Allen Show is an American variety show hosted by Steve Allen from June 1956 to June 1960 on NBC, from September 1961 to December 1961 on ABC, and in first-run syndication from 1962 to 1964. The first three seasons aired on Sunday nights at 8:00pm Eastern Time, then on Mondays at 10:00pm Eastern in the 1959-60 season. After a seasons absence, the series briefly returned on Wednesdays at 7:30pm Eastern. The syndicated version aired mostly in late nights. The program, between September 1957 and June 1960 became one of the first programs to be telecast in "compatible color" Kinescopes of the NBC version were later rerun on Comedy Central in the early 1990s, with new introductions by Allen.

The Ed Sullivan Show is an American TV variety show that originally ran on CBS from Sunday June 20, 1948 to Sunday June 6, 1971, and was hosted by New York entertainment columnist Ed Sullivan. It was replaced in September 1971 by the CBS Sunday Night Movie, which ran only one season and was eventually replaced by other shows. In 2002, The Ed Sullivan Show was ranked #15 on TV Guide's 50 Greatest TV Shows of All Time.
TV Show Star Rating : 6.909  Read More