Hex is a British television programme developed by Shine Limited and aired on the Sky One satellite channel. The story is set in a remote English boarding school with a mysterious past. Series one explores the supernatural relationship between a Fallen Angel named Azazeal and a student called Cassie who is also a witch. In the second series the story centres around 500 year old anointed one Ella Dee, and Azazeals son Malachi. Both series of the show are currently available on Region 2 DVD, with the first series released on Region 1 DVD in June 2007. The show was cancelled in April 2006 after the end of the second series. The programme premiered in the United States on BBC America, sometime after, dividing the episodes into two equally long series for American viewers. Series 1 aired in the summer of 2006, while series 2 aired in the summer of 2007. 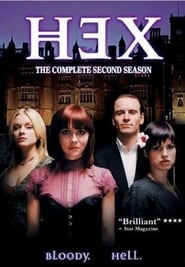 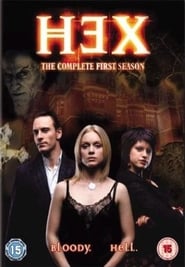 Dark Shadows is an American gothic soap opera that originally aired weekdays on the ABC television network, from June 27, 1966, to April 2, 1971. The show was created by Dan Curtis. The story bible, which was written by Art Wallace, does not mention any supernatural elements. It was unprecedented in daytime television when ghosts were introduced about six months after it began. The series became hugely popular when vampire Barnabas Collins appeared a year into its run. Dark Shadows also featured werewolves, zombies, man-made monsters, witches, warlocks, time travel, and a parallel universe. A small company of actors each played many roles; indeed, as actors came and went, some characters were played by more than one actor. Major writers besides Art Wallace included Malcolm Marmorstein, Sam Hall, Gordon Russell, and Violet Welles. Dark Shadows was distinguished by its vividly melodramatic performances, atmospheric interiors, memorable storylines, numerous dramatic plot twists, unusually adventurous music score, and broad and epic cosmos of characters and heroic adventures. Now regarded as something of a classic, it continues to enjoy an intense cult following. Although the original series ran for only five years, its scheduling as a daily daytime drama allowed it to amass more single episodes during its run than most other science-fiction/fantasy genre series produced for English-language television, including Doctor Who and the entire Star Trek television franchise. Only the paranormal soap opera Passions, with a total of 2,231 episodes, has more.
TV Show Star Rating : 6.8  Read More

Sydney Bristow, an agent who has been tricked to believe she is working for the U.S. government, is actually working for a criminal organization named the Alliance of Twelve. Upon learning this, Sydney becomes a double agent for the real CIA.
TV Show Star Rating : 6  Read More

Lost Girl focuses on the gorgeous and charismatic Bo, a supernatural being called a succubus who feeds on the energy of humans, sometimes with fatal results. Refusing to embrace her supernatural clan and its rigid hierarchy, Bo is a renegade who takes up the fight for the underdog while searching for the truth about her own mysterious origins.
TV Show Star Rating : 6.7  Read More

Scott McCall, a high school student living in the town of Beacon Hills has his life drastically changed when he's bitten by a werewolf, becoming one himself. He must henceforth learn to balance his problematic new identity with his day-to-day teenage life. The following characters are instrumental to his struggle: Stiles, his best friend; Allison, his love interest who comes from a family of werewolf hunters; and Derek, a mysterious werewolf with a dark past. Throughout the series, he strives to keep his loved ones safe while maintaining normal relationships with them.
TV Show Star Rating : 6.9  Read More

The story of two vampire brothers obsessed with the same girl, who bears a striking resemblance to the beautiful but ruthless vampire they knew and loved in 1864.
TV Show Star Rating : 6.9  Read More