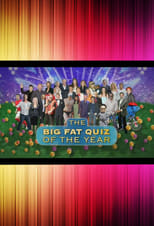 The Big Fat Quiz of the Year

The Big Fat Quiz of the Year is an annual British television programme broadcast in the last or first week of the year on Channel 4. Essentially, the show is a comedy panel game in the style of a pub quiz. Three teams, of two celebrities each, are asked questions relating to the events of the year just gone by, which they write answers to on an electronic board in front of them. At the end of each round, they then display their answers, scoring a point for each correct one. The first edition was broadcast in December 2004. There has been another at the end of each year since, as well as a special edition in November 2007 for Channel 4s 25th anniversary celebrations and three special editions in September 2012, themed to celebrate Channel 4s three decades. A second set of "decades" editions screened in September 2013. Repeats can usually be found days later on Channel 4s sister-channel E4 and/or 4seven. Stand-up comedian Jimmy Carr has been the host and quizmaster of each edition to date. Channel 4 has made full episodes of The Big Fat Quiz of the Year available to view on 4oD.

Similar TV Shows to The Big Fat Quiz of the Year

Hilarious, totally-irreverent, near-slanderous political quiz show, based mainly on news stories from the last week or so, that leaves no party, personality or action unscathed in pursuit of laughs.
TV Show Star Rating : 7.4  Read More

A comedic panel show featuring team captains Lee Mack and David Mitchell plus two guests per side, hosted by Rob Brydon (formerly Angus Deayton). Each person must reveal embarrassing facts and outrageous lies during a series of different rounds including "Home Truths", "This Is My..." and "Quickfire Lies". It is up to the opposing team to tell tall tales from fantastic facts.
TV Show Star Rating : 7.4  Read More

Never Mind the Buzzcocks is a comedy panel game show with a pop and rock music theme. The show is infamous for its dry, sarcastic humour and scathing, provocative attacks on the pop industry.
TV Show Star Rating : 7.5  Read More

A League of Their Own is a comedy panel game that was first broadcast on Sky1 on 11 March 2010. It is hosted by Gavin and Stacey star James Corden and features Andrew Flintoff and Jamie Redknapp as team captains and John Bishop and Georgie Thompson were regular panelists for the first four series alongside two weekly guests. Jack Whitehall joined the cast as a regular panellist from the fifth series onwards.
TV Show Star Rating : 9  Read More