Out of Practice is an American situation comedy that was produced by Paramount Network Television and originally broadcast on sister company CBS from September 19, 2005 to March 29, 2006. With producers Joe Keenan and Christopher Lloyd at the helm, the show was about a family of five doctors who had little in common and usually did not get along. CBS officially cancelled it on May 17, 2006, at its upfront presentation. 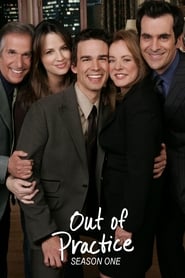 Similar TV Shows to Out of Practice

Empty Nest is an American sitcom that originally aired on NBC from 1988 to 1995. The series was created as a spin-off of The Golden Girls by creator and producer Susan Harris. For its first three seasons, Empty Nest was one of the year's top 10 most-watched programs. It was produced by Witt/Thomas/Harris Productions in association with Touchstone Television. The show concept borrowed some elements from the British comedy series Father, Dear Father, also featuring a father living with his two daughters and large dog. However, unlike that series, the two daughters in Empty Nest are self-supporting adults, and the lead character is a widower. Empty Nest was part of NBC's Saturday night block of programming, and during its first four seasons it aired at 9:30pm ET, directly following The Golden Girls. Two of the cast were alumni from one of Susan Harris' earlier shows, Soap; Mulligan was Manoff's father-in-law in Soap.
TV Show Star Rating : 5.5  Read More

The 4077th Mobile Army Surgical Hospital is stuck in the middle of the Korean war. With little help from the circumstances they find themselves in, they are forced to make their own fun. Fond of practical jokes and revenge, the doctors, nurses, administrators, and soldiers often find ways of making wartime life bearable.
TV Show Star Rating : 7.7  Read More

A married father of three tries to maintain his manliness in a world increasingly dominated by women.
TV Show Star Rating : 6.9  Read More

Before there were parenting blogs, trophies for showing up, and peanut allergies, there was a simpler time called the '80s. For geeky 11-year old Adam these were his wonder years and he faced them armed with a video camera to capture all the crazy. The Goldbergs are a loving family like any other, just with a lot more yelling.
TV Show Star Rating : 7.7  Read More