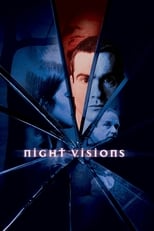 Night Visions is an hour-long, American television horror anthology series, with each episode comprising two half-hour stories dealing with themes of the supernatural or simply the dark side of human nature. Henry Rollins was the uncredited host of the show. The series aired on Fox from July 12 to September 6, 2001, after which it was picked up by the Sci Fi Channel, which reran the series beginning June 14, 2002. Sci Fi later aired the three remaining original episodes that produced for, but unaired, on Fox. One of these, "Cargo / Switch", ran as part of the Night Visions series, while the two other episodes segments were edited into the Sci Fi Channel film Shadow Realm, minus the Rollins introductions and the Night Visions name. The shows directors included some best known for feature films, including Tobe Hooper and Joe Dante, and others, such as Brian Dennehy, JoBeth Williams, and Bill Pullman, known primarily as actors.

The Crains, a fractured family, confront haunting memories of their old home and the terrifying events that drove them from it.
TV Show Star Rating : 8.1  Read More

Thirty years ago, in the sleepy community of Waterbury, a killer known as “The Executioner” murdered Sarah Bennett's parents. Now Sarah and her husband Dylan have returned to town, only to find herself the centerpiece in a series of horrifying murders centered around the seven deadly sins.
TV Show Star Rating : 6.5  Read More

BlackBoxTV Presents is an American horror anthology web series created by Tony E. Valenzuela and Philip DeFranco. The first season, which featured a cast of YouTube creators including DeFranco, iJustine and Shane Dawson, was self-funded by Valenzuela and debuted on the BlackBoxTV YouTube channel on August 17, 2010.
TV Show Star Rating : 10  Read More

Nightmares and Dreamscapes: From the Stories of Stephen King is an 8-episode anthology series on TNT based on short stories written by Stephen King. It debuted on July 12, 2006, and ended its run on August 2, 2006. Although most of them are from the collection of the same name, there are some stories from different collections by King. A trailer confirming a DVD release of the series was made available in October 2006. The series was filmed entirely in Melbourne, Australia.
TV Show Star Rating : 6.9  Read More