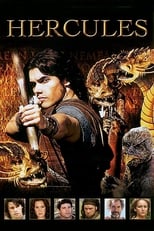 Hercules is a 2005 RHI Entertainment television miniseries, chronicling the life of the legendary Greek hero, Heracles, called Hercules in this series. It is most often aired on television as a two-part miniseries: the first part documents his early life in Tiryns and his desire and marriage to the lady Megara; the second part follows the more widely-recognised part of his life, in seeking redemption for the madness-induced murder of his family. The series incorporates Herculess murder of his family—usually not included in modern interpretations of the character—and includes five of his twelve labors from Greek mythology. The series alters some of the elements of the myths including placing the giant Antaeus as his father while in Greek myths his father was the king of the gods, Zeus.

Teenage Hercules is training as a hero and trying to adjust to life while battling his evil uncle Hades.
TV Show Star Rating : 6.2  Read More

Young Hercules was a spin-off from the 1990s syndicated television series Hercules: The Legendary Journeys. It was aired on Fox Kids from September 12, 1998, to May 12, 1999. It lasted one season with 50 episodes and starred Ryan Gosling in the title role.
TV Show Star Rating : 6.4  Read More

Ergo Proxy is a science fiction suspense anime television series, produced by Manglobe, which premiered across Japan on 25 February 2006 on the WOWOW satellite network. It is directed by Shukō Murase, with screenplay by Dai Satō et al.. Ergo Proxy has been described as a dark sciencefiction mystery with philosophical underpinnings. It features a combination of 2D digital cel animation, 3D computer modeling, and digital special effects.
TV Show Star Rating : 7.6  Read More

In this adaptation of Homer's timeless epic, Armand Assante stars as Odysseus, the warrior King of the mythical island of Ithaca, who must endure a decade long quest to reach home after the Trojan war, overcoming savage monsters, powerful forces of nature, and seductive nymphs, and he must outsmart them all, with all the guile and intellect he can muster. Directed by Andrei Konchalovsky, the miniseries aired in two-parts beginning on May 18, 1997 on NBC.
TV Show Star Rating : 6.9  Read More

The Diclonius, a mutated homo sapien that is said to be selected by God and will eventually become the destruction of mankind, possesses two horns in their heads, and has a "sixth sense" which gives it telekinetic abilities. Due to this dangerous power, they have been captured and isolated in laboratories by the government. Lucy, a young and psychotic Diclonius, manages to break free of her confines and brutally murder most of the guards in the laboratory, only to get shot in the head as she makes her escape. She survives and manages to drift along to a beach, where two teenagers named Kouta and Yuka discovers her. Having lost her memories, she was named after the only thing that she can now say, "Nyuu," and the two allow her to stay at Kouta's home. However, it appears that the evil "Lucy" is not dead just yet...
TV Show Star Rating : 8.3  Read More

A fantasy drama set in a world of legendary heroes and mythical creatures. Far from home and desperate for answers, Jason washes up on the shores of an ancient land. A mysterious place; a world of bull leaping, of snake haired goddesses and of palaces so vast it was said they were built by giants - this is the city of Atlantis. Aided by his two new friends, Pythagoras and Hercules, Jason embarks on a voyage of discovery, and salvation, which sees him brush shoulders with Medusa, come face to face with the Minotaur and even do battle with the dead.
TV Show Star Rating : 6.4  Read More

Paris of Troy goes to Sparta on a diplomatic mission and falls in love with Helen, the wife of King Menelaus. When lovers flee to Troy, the bloody seeds of a long war, sown by King Agamemnon of Mycenae, finally sprout, so an old prophecy is fulfilled.
TV Show Star Rating : 6.1  Read More

Space Sentinels is a Saturday morning animated series produced by Filmation which debuted on the American NBC network on September 10, 1977 and ran for thirteen half-hour episodes. The series has been called "ahead of its time" due to its racially diverse cast of main characters. In this series, the Roman mythological figures Hercules and Mercury are joined by Astrea, a character created specifically for the series, to form a superhero team to protect mankind. The complete series was released on Region 1 DVD on August 22, 2006, along with the complete series of The Freedom Force.
TV Show Star Rating : 10  Read More

Trevor Hale is an attractive, sarcastic and irreverent man who claims to be Cupid, the Roman god of love, and has descended from Mount Olympus to work on Earth.
TV Show Star Rating : 7.8  Read More

Jason and the Argonauts is based on the classic myth of Jason and the Golden Fleece. At a young age, Jason witnesses the brutal deposement and murder of his father at the hands of his uncle Pelias. Twenty years later, Jason returns home to claim his rightful place as king, but Pelias orders him to be executed, and in order to save himself Jason is forced to go on a dangerous quest to find the legendary Golden Fleece. So Jason gathers a motley crew of men and sets sail on the Argos. This Hallmark Production was created as a two part mini-series event, starring Jason London as Jason and Jolene Blalock as Medea.
TV Show Star Rating : 5.9  Read More