Brass Eye is a UK television series of satirical news magazines. A series of six episodes aired on Channel 4 in 1997, and a further episode in 2001. The series was created by Chris Morris, and written by Morris, David Quantick, Peter Baynham, Jane Bussmann, Arthur Mathews and Graham Linehan. The series was directed by Michael Cumming. It was a sequel to Morriss earlier spoof news programmes On the Hour and The Day Today. It satirised media portrayal of social ills, in particular sensationalism and creation of moral panics. The series starred Morriss The Day Today colleague Doon MacKichan and Gina McKee, Mark Heap, Simon Pegg, Julia Davis and Kevin Eldon. 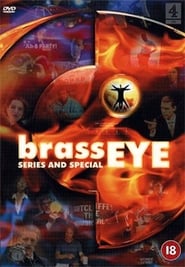 Whoops Apocalypse is a six-part 1982 British sitcom by Andrew Marshall and David Renwick, made by London Weekend Television for ITV. Marshall and Renwick later reworked the concept as a 1986 film of the same name from ITC Entertainment, with almost completely different characters and plot, although one or two of the original actors returned in different roles. The series has a big cult audience, and copies of videos are heavily sought after. The British budget label Channel 5 Video released a compilation cassette of all six episodes edited together into one 137-minute chunk in 1987. In 2010 Network DVD released both the complete, unedited series and the movie on a 2-DVD set entitled Whoops Apocalypse: The Complete Apocalypse.. John Otway also recorded a song called "Whoops Apocalypse", which was used as the theme song for the film. He occasionally performs it live.
TV Show Star Rating : 7  Read More

Satirical and surreal news show. Nish Kumar and a cast of hilarious correspondents keep you up to date with everything that has happened - or not happened - this week.
TV Show Star Rating : 6  Read More

One Foot in the Grave is a BBC television sitcom series written by David Renwick. The show ran for six series, including seven Christmas specials, two Comic Relief specials, over an eleven-year period, from early 1990 to late 2000. The latter Comic Relief special was shown after the series officially ended in spring 2001. The series features the exploits of Victor Meldrew, played by Richard Wilson, and his long-suffering wife, Margaret, played by Annette Crosbie. The programmes invariably deal with Meldrew's battle against the problems he creates for himself. Living in a typical household in an unnamed English suburb, Victor takes involuntary early retirement. His various efforts to keep himself busy, while encountering various misfortunes and misunderstandings are the themes of the sitcom. The series was largely filmed on location in Walkford, near New Milton in Hampshire, although several clues show that the series may have been set in Hampshire – possibly Winchester. Despite its traditional production, the series supplants its domestic sitcom setting with elements of black humour and surrealism. The series was occasionally the subject of controversy for some of its darker story elements, but was nevertheless the recipient of a number of awards, including the 1992 BAFTA for Best Comedy. In 2004, the series came tenth in a 2004 BBC poll to find "Britain's Best Sitcom". The programme also came 80th in the British Film Institute's 100 Greatest British Television Programmes. The series, originally shown on BBC One, is now available on DVD and is regularly repeated in the United Kingdom on Gold. Seven episodes were remade for BBC Radio 2 and the series also inspired a novel.
TV Show Star Rating : 7.5  Read More

Psychoville is a British dark comedy television serial written by and starring The League of Gentlemen members Reece Shearsmith and Steve Pemberton. It debuted on BBC Two on 18 June 2009. Pemberton and Shearsmith each play numerous characters, with Dawn French and Jason Tompkins in additional starring roles. The first series was followed by a Halloween special, broadcast on 31 October 2010, which saw Imelda Staunton added to the main cast along with previously supporting actors Eileen Atkins and Daniel Kaluuya. The second series started broadcasting on 5 May 2011 and ended on 6 June. Reece Shearsmith has officially announced that there will not be a third series.
TV Show Star Rating : 6.9  Read More

A satirical inversion of the ideal of the perfect American nuclear family, they are an eccentric wealthy family who delight in everything grotesque and macabre, and are never really aware that people find them bizarre or frightening. In fact, they themselves are often terrified by "normal" people. The Addams Family is the creation of American cartoonist Charles Addams.
TV Show Star Rating : 7.5  Read More

The New Statesman is a British sitcom of the late 1980s and early 1990s satirising the Conservative government of the time. It was written by Laurence Marks and Maurice Gran at the request of, and as a starring vehicle for, its principal actor, Rik Mayall. The show's theme tune is an arrangement by Alan Hawkshaw of part of the Promenade from Pictures at an Exhibition by Russian composer Modest Mussorgsky. The programme was made by the ITV franchise Yorkshire Television between 1987 and 1992, although the BBC made two special episodes; one in 1988, the other in 1994.
TV Show Star Rating : 7.9  Read More