Of Kings and Prophets

An epic biblical saga of faith, ambition and betrayal as told through the eyes of the battle-weary King Saul, the resentful prophet Samuel and the resourceful young shepherd David—all on a collision course with destiny that will change the world. One thousand years before Christ, the first king of the Israelites, Saul, struggles to unify the 12 Israelite tribes and defend his fledgling nation against savage enemy attacks. The prophet Samuel relays a message from God to King Saul that he must destroy one of Israels ancient enemies. But when Saul defies that message, Samuel prophesies that the Lord will tear the kingdom of Israel from him and choose another in his place. In time, Saul comes to realize that his greatest threat will not come from his enemies, but from the shepherd, David. 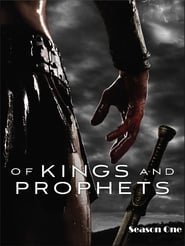 Similar TV Shows to Of Kings and Prophets

Set in ancient Israel, The Dovekeepers is based on the true events at Masada in 70 C.E. After being forced out of their home in Jerusalem by the Romans, 900 Jews were ensconced in a fortress at Masada, a mountain in the Judean desert. Besieged at Masada, the Jews held out for months against the vast Roman armies. The events are recounted from the perspective of a few extraordinary women who arrive at Masada with unique backstories, but a common bond for survival. Additionally, these women, who work together daily as dovekeepers, are all concealing substantial secrets. This four-hour limited event series is based on Alice Hoffman's bestselling, critically acclaimed historical novel.
TV Show Star Rating : 4.4  Read More

Set in 15th century Italy at the height of the Renaissance, The Borgias chronicles the corrupt rise of patriarch Rodrigo Borgia to the papacy, where he proceeds to commit every sin in the book to amass and retain power, influence and enormous wealth for himself and his family.
TV Show Star Rating : 7.4  Read More

The story of Bill Henrickson and his life in suburban Salt Lake City, balancing the needs of his three wives - Barb, Nicki and Margene- their seven kids, three new houses and the opening of his newest hardware store. When disturbing news arrives about Bill's father, he is forced to reconnect with his polygamist parents who live on a fundamentalist compound in rural Utah.
TV Show Star Rating : 7.6  Read More

The unscrupulous world of the Greenleaf family and their sprawling Memphis megachurch, where scandalous secrets and lies are as numerous as the faithful. Born of the church, the Greenleaf family love and care for each other, but beneath the surface lies a den of iniquity—greed, adultery, sibling rivalry and conflicting values—that threatens to tear apart the very core of their faith that holds them together.
TV Show Star Rating : 6.7  Read More

7th Heaven is an American family drama television series, created and produced by Brenda Hampton. The series premiered on August 26, 1996, on The WB, the first time that the network aired Monday night programming, and was originally broadcast from August 26, 1996 to May 13, 2007. The series finale was scheduled for May 8, 2006; however, the show was renewed by The CW when the intended final episode received high ratings. The final season premiered on Monday, September 25, 2006 and ended on May 13, 2007. 7th Heaven is the longest-running series that has ever aired on The WB and is the longest-running family drama in television history. It is also the longest-running show produced by Aaron Spelling. Dan Foliart composed the theme song "7th Heaven", which is performed by Steve Plunkett in the introduction of each episode.
TV Show Star Rating : 5.2  Read More