Wacky Races is an American animated television series produced by Hanna-Barbera. The series, inspired by the 1965 slapstick comedy film The Great Race, features 11 different cars racing against each other in various road rallies throughout North America, with each driver hoping to win the title of the "Worlds Wackiest Racer." Wacky Races ran on CBS from September 14, 1968, to January 4, 1969. Seventeen episodes were produced, with each episode featuring two different races. The cartoon had an unusually large number of regular characters, with twenty-three people and animals spread among the 11 race cars. Reruns of the series currently air several times a day on Cartoon Networks classic animation network Boomerang. 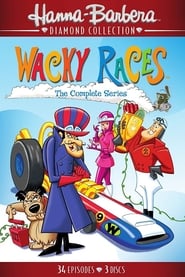 Top Gear Italia is an international version of the popular British BBC Two motoring show. This version of the show is presented by Guido Meda (an Italian commentator of the Moto GP), Joe Bastianich (an American restaurateur, previously a judge on MasterChef Italia) and Davide Valsecchi (an Italian racing driver and GP2 Series champion). It also features the Italian version of "The Stig".
TV Show Star Rating : 6.5  Read More

Top Gear France is a french TV show on cars, based on the english original tv show Top Gear. IT is shwon on TNT RMC Découverte and will be hosted by the french actor Philippe Lellouche, the professional racing driver Bruce Jouanny and EDM musician and journalist Yann Larret-Menezo.
TV Show Star Rating : 6  Read More

Cars Toons is an American series of short animated films or Cars Toons by Pixar. It features Mater and Lightning McQueen from Cars. Larry the Cable Guy reprised his role as Mater, while Keith Ferguson replaced Owen Wilson as the voice of Lightning McQueen. The series' first broadcast was on October 27, 2008, on Toon Disney, Disney Channel, and ABC Family.
TV Show Star Rating : 7.2  Read More