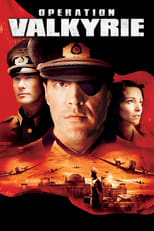 He turned against an empire to save the world.

In 1944, a group of high command officers plot an attempt against Hitler, and one of the leaders of the conspiracy, Stauffenberg (Sebastian Koch), goes to a meeting with the Fuhrer in charge of exploding the place. However, Hitler survives and the officers are executed. This unsuccessful operation was called "Valkyrie Operation", and this realistic movie discloses this true event.

In 1947, four German judges who served on the bench during the Nazi regime face a military tribunal to answer charges of crimes against humanity. Chief Justice Haywood hears evidence and testimony not only from lead defendant Ernst Janning and his defense attorney Hans Rolfe, but also from the widow of a Nazi general, an idealistic U.S. Army captain and reluctant witness Irene Wallner.
Movie Star Rating : 7.8  Read More

The film "Amen." examines the links between the Vatican and Nazi Germany. The central character is Kurt Gerstein, a member of the Institute for Hygiene of the Waffen-SS who is horrified by what he sees in the death camps. Moreover, he is shocked to learn that the process he used to purify water for his troops, by using zyklon, served as a basis to kill people in gas chambers.
Movie Star Rating : 7.1  Read More