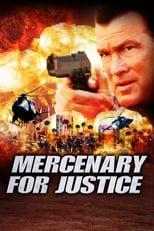 Mercenary John Seeger is one of the best in the business. John and his crew battle some soldiers on Galmoral Island in Southern Africa as theyre trying to rescue the French Ambassador -- theres a coup going on. Some of Johns soldiers unload their machine guns into the Ambassador and his family, blowing the mission and getting his best friend Radio Jones killed. He heads back to the US and visits Radios wife Shondra to tells her the news, and then promises that hell take care of her and her son Eddie. But shortly after he makes that vow, Shondra and Eddie get kidnapped.

Similar Movies to Mercenary for Justice

As a CIA officer, Evelyn Salt swore an oath to duty, honor and country. Her loyalty will be tested when a defector accuses her of being a Russian spy. Salt goes on the run, using all her skills and years of experience as a covert operative to elude capture. Salt's efforts to prove her innocence only serve to cast doubt on her motives, as the hunt to uncover the truth behind her identity continues and the question remains: "Who is Salt?"
Movie Star Rating : 6.2  Read More

CIA Analyst Jack Ryan is drawn into an illegal war fought by the US government against a Colombian drug cartel.
Movie Star Rating : 6.4  Read More

Max Kirkpatrick is a cop who protects Kate McQuean, a civil law attorney, from a renegade KGB team out to terminate her
Movie Star Rating : 4  Read More

Jaded ex-CIA operative John Creasy reluctantly accepts a job as the bodyguard for a 10-year-old girl in Mexico City. They clash at first, but eventually bond, and when she's kidnapped he's consumed by fury and will stop at nothing to save her life.
Movie Star Rating : 7.3  Read More

NYPD cop, John McClane's plan to reconcile with his estranged wife is thrown for a serious loop when minutes after he arrives at her office, the entire building is overtaken by a group of terrorists. With little help from the LAPD, wisecracking McClane sets out to single-handedly rescue the hostages and bring the bad guys down.
Movie Star Rating : 7.5  Read More

Out-of-control, trash-talking buddy cops Marcus Burnett and Mike Lowrey of the Miami Narcotics Task Force reunite, and bullets fly, cars crash and laughs explode as they pursue a whacked-out drug lord from the streets of Miami to the barrios of Cuba. But the real fireworks result when Marcus discovers that playboy Mike is secretly romancing Marcus’ sexy sister.
Movie Star Rating : 6.3  Read More

Jerry, a small-town Minnesota car salesman is bursting at the seams with debt... but he's got a plan. He's going to hire two thugs to kidnap his wife in a scheme to collect a hefty ransom from his wealthy father-in-law. It's going to be a snap and nobody's going to get hurt... until people start dying. Enter Police Chief Marge, a coffee-drinking, parka-wearing - and extremely pregnant - investigator who'll stop at nothing to get her man. And if you think her small-time investigative skills will give the crooks a run for their ransom... you betcha!
Movie Star Rating : 7.8  Read More

A dangerous CIA renegade resurfaces after a decade on the run. When the safe house he's remanded to is attacked by mercenaries, a rookie operative escapes with him. Now, the unlikely allies must stay alive long enough to uncover who wants them dead.
Movie Star Rating : 6.3  Read More

The Way of the Gun

Parker and Longbaugh are a pair of low-level petty criminals, living off the grid and funding their existence through unconventional and often illegal means. Wanting to move past petty crime, they vow to get the proverbial "big score.
Movie Star Rating : 6.4  Read More

Assassin Robert Rath arrives at a funeral to kill a prominent mobster, only to witness a rival hired gun complete the job for him - with grisly results. Horrified by the murder of innocent bystanders, Rath decides to take one last job and then return to civilian life. But finding his way out of the world of contract killing grows ever more dangerous as Rath falls for his female target and becomes a marked man himself.
Movie Star Rating : 6  Read More

A mild-mannered father is transformed into a killing machine after his family is torn apart by a violent act.
Movie Star Rating : 4.8  Read More