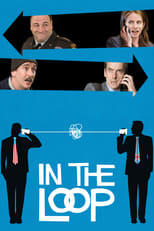 The fate of the world is on the line.

The US President and the UK Prime Minister are looking to launch a war in the Middle East. The plot follows government officials and advisers in their behind-the-scenes efforts either to promote the war or prevent it. Spinal Tap meets Strangelove. A satirical demolition of Whitehall and Washington: politically astute, hilarious and terrifyingly real.

Similar Movies to In the Loop

During the final weeks of a presidential race, the President is accused of sexual misconduct. To distract the public until the election, the President's adviser hires a Hollywood producer to help him stage a fake war.
Movie Star Rating : 6.8  Read More

A military veteran goes on a journey into the future, where he can foresee his death and is left with questions that could save his life and those he loves.
Movie Star Rating : 6.8  Read More

The story of the miraculous evacuation of Allied soldiers from Belgium, Britain, Canada and France, who were cut off and surrounded by the German army from the beaches and harbour of Dunkirk between May 26th and June 4th 1940 during World War II.
Movie Star Rating : 7.4  Read More

Major Bill Cage is an officer who has never seen a day of combat when he is unceremoniously demoted and dropped into combat. Cage is killed within minutes, managing to take an alpha alien down with him. He awakens back at the beginning of the same day and is forced to fight and die again... and again - as physical contact with the alien has thrown him into a time loop.
Movie Star Rating : 7.6  Read More

John Rambo is released from prison by the government for a top-secret covert mission to the last place on Earth he'd want to return - the jungles of Vietnam.
Movie Star Rating : 6.3  Read More

During the U.S.-led occupation of Baghdad in 2003, Chief Warrant Officer Roy Miller and his team of Army inspectors were dispatched to find weapons of mass destruction believed to be stockpiled in the Iraqi desert. Rocketing from one booby-trapped and treacherous site to the next, the men search for deadly chemical agents but stumble instead upon an elaborate cover-up that threatens to invert the purpose of their mission.
Movie Star Rating : 6.4  Read More

In this animated hit, a neurotic worker ant in love with a rebellious princess rises to unlikely stardom when he switches places with a soldier. Signing up to march in a parade, he ends up under the command of a bloodthirsty general. But he's actually been enlisted to fight against a termite army.
Movie Star Rating : 6  Read More

A young British soldier must find his way back to safety after his unit accidentally abandons him during a riot in the streets of Belfast.
Movie Star Rating : 6.7  Read More

In 2002, cable news producer Kim Barker (Tina Fey) decides to shake up her routine by taking a daring new assignment in Kabul, Afghanistan. Dislodged from her comfortable American lifestyle, Barker finds herself in the middle of an out-of-control war zone. Luckily, she meets Tanya Vanderpoel (Margot Robbie), a fellow journalist who takes the shellshocked reporter under her wing. Amid the militants, warlords and nighttime partying, Barker discovers the key to becoming a successful correspondent.
Movie Star Rating : 6.2  Read More

A female Senator succeeds in enrolling a woman into Combined Reconnaissance Team training where everyone expects her to fail.
Movie Star Rating : 6  Read More