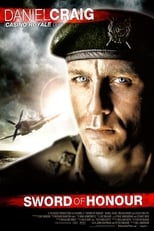 Guy Crouchback joins the war effort during World War 2, an idealistic quest to join the forces of good in the fight against evil. But his efforts is not rewarded, he never has any chance to join any real fighting, circumstances always prevent it. Instead he finds himself in the middle of an army full of cowards, incompetents and a few outright evil men. They of course reap the fortunes of war, promotions and fame, but never Crouchback. His war is just an endless list of transfers and an hopeless but noble quest for righteousness.