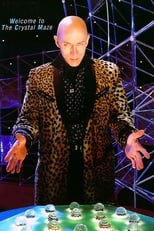 The Crystal Maze was a British game show, produced by Chatsworth Television and shown on Channel 4 in the United Kingdom between 15 February 1990 and 10 August 1995. There was one series per year, with the first four series presented by Richard OBrien and the final two by Ed Tudor-Pole. Each show was one hour long, including adverts. The series is set in "The Crystal Maze", which features four different "zones" set in various periods of time and space. A team of six contestants take part in a series of challenges in order to win "time crystals". Each crystal gives the team five seconds of time inside "The Crystal Dome", the centrepiece of the maze where the contestants take part in their final challenge.

The show where everything's made up and the points don't matter. Not a talk show, not a sitcom, not a game show, Whose Line Is It Anyway? is a completely unique concept to network television. Four talented actors perform completely unrehearsed skits and games in front of a studio audience. Host Drew Carey sets the scene, with contributions from the audience, but the actors rely completely on their quick wit and improvisational skills. It's genuinely improvised, so anything can happen - and often does.
TV Show Star Rating : 7.8  Read More

America's favorite quiz show where contestants are presented with general knowledge clues in the form of answers, and must phrase their responses in question form.
TV Show Star Rating : 6.6  Read More

A British reality television game show in which a number of contestants live in an isolated house for several weeks, trying to avoid being evicted by the public with the aim of winning a large cash prize at the end of the run.
TV Show Star Rating : 2.8  Read More

Four panelists must determine guests' occupations - and, in the case of famous guests, while blindfolded, their identity - by asking only "yes" or "no" questions.
TV Show Star Rating : 7.1  Read More

Two teams composed of a known personality and a contestant chosen from the public battle to guess the outcomes of astonishing scientific experiments.
TV Show Star Rating : 1.4  Read More

I'm a Celebrity...Get Me Out of Here! is a British reality television show, first screened in 2002, in which celebrities live in jungle conditions with few creature comforts. The show has been hosted by Ant & Dec since its inception. It is filmed in Murwillumbah, New South Wales, Australia and broadcast on ITV in the UK and on 3e in Ireland. The show is one of the largest in the world, with more than 700 staff working on the show 24 hours a day for three weeks. It is sponsored in the UK by supermarket chain Iceland and in Ireland by MultiTrip.com.
TV Show Star Rating : 5.3  Read More

A Canadian reality television show in which a group of contestants, known as "HouseGuests", are sequestered in the Big Brother House, under the surveillance of cameras and microphones, for the chance to win a grand prize of $100,000 by being the last remaining HouseGuest. Each week, the HouseGuests vote to evict one of their own until two HouseGuests remain on finale night. The winner is decided by the last seven evicted HouseGuests, known as the Big Brother Jury.
TV Show Star Rating : 5.4  Read More

Greg Davies is the Taskmaster, and with the help of his ever-loyal assistant Alex Horne, they will set out to test the wiles, wit, wisdom and skills of five hyper-competitive comedians. Who will be crowned the Taskmaster champion in this brand new game show?
TV Show Star Rating : 8.6  Read More

Mysteries of the Abandoned - (Jan 22nd)