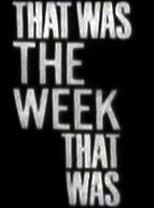 That Was The Week That Was

That Was the Week That Was, informally TWTWTW or TW3, is a satirical television comedy programme on BBC Television in 1962 and 1963. It was devised, produced and directed by Ned Sherrin and presented by David Frost. An American version by the same name aired on NBC from 1964 to 1965, also featuring Frost. The programme is considered a significant element of the satire boom in the United Kingdom in the early 1960s. It broke ground in comedy through lampooning the establishment and political figures. Its broadcast coincided with coverage of the politically charged Profumo affair and John Profumo, the politician at the centre of the affair, became a target for derision. TW3 was first broadcast on Saturday 24 November 1962.

Similar TV Shows to That Was The Week That Was

2DTV is a British satirical animated television show that was broadcast on ITV in the United Kingdom from March 2001 to December 2004. Lasting a total of five series and thirty-three episodes, 2DTV became the successor of popular 80's TV series Spitting Image, and the predecessor of 2008 ITV satirical animation Headcases.
TV Show Star Rating : 6.3  Read More

The Goodies is a British television comedy series of the 1970s and early 1980s. The series, which combines surreal sketches and situation comedy, was broadcast by BBC 2 from 1970 until 1980 — and was then broadcast by the ITV company LWT for a year, between 1981 to 1982. The show was co-written by and starred Tim Brooke-Taylor, Graeme Garden and Bill Oddie. Bill Oddie also wrote the music and songs for the series — while "The Goodies Theme" was co-written by Bill Oddie and Michael Gibbs. The directors/producers of the series were John Howard Davies, Jim Franklin and Bob Spiers. An early title which was considered for the series was Narrow Your Mind and prior to that the working title was Super Chaps Three.
TV Show Star Rating : 7.6  Read More

Hilarious, totally-irreverent, near-slanderous political quiz show, based mainly on news stories from the last week or so, that leaves no party, personality or action unscathed in pursuit of laughs.
TV Show Star Rating : 7.5  Read More

James Hacker MP the Government's bumbling minister for Administrative Affairs is propelled along the corridors of power to the very pinnacle of politics - No. 10. Could this have possibly have been managed by his trusted Permanent Private Secretary, the formidably political Sir Humphrey Appleby who must move to the “Top Job” in Downing Street to support him, together with his much put upon PPS Bernard Wolley. What could possibly go wrong?
TV Show Star Rating : 8  Read More

Set principally in the private office of a British Cabinet minister in the Department of Administrative Affairs in Whitehall, Yes Minister follows the ministerial career of The Rt Hon Jim Hacker MP, played by Paul Eddington. His various struggles to formulate and enact legislation or effect departmental changes are opposed by the British Civil Service, in particular his Permanent Secretary, Sir Humphrey Appleby, played by Nigel Hawthorne. His Principal Private Secretary Bernard Woolley, played by Derek Fowlds, is usually caught between the two. The sequel, Yes, Prime Minister, continued with the same cast and followed the events of the premiership of Jim Hacker after his unexpected elevation to Number 10 upon the resignation of the previous PM.
TV Show Star Rating : 8  Read More

Brass Eye is a UK television series of satirical news magazines. A series of six episodes aired on Channel 4 in 1997, and a further episode in 2001. The series was created by Chris Morris, and written by Morris, David Quantick, Peter Baynham, Jane Bussmann, Arthur Mathews and Graham Linehan. The series was directed by Michael Cumming. It was a sequel to Morris's earlier spoof news programmes On the Hour and The Day Today. It satirised media portrayal of social ills, in particular sensationalism and creation of moral panics. The series starred Morris's The Day Today colleague Doon MacKichan and Gina McKee, Mark Heap, Simon Pegg, Julia Davis and Kevin Eldon.
TV Show Star Rating : 8  Read More