Popetown is a controversial animated sitcom, billed by its producers as "Father Ted meets South Park", following the doodles and scribblings of a student at school during a lesson. His drawings depict the life of Father Nicholas, who lives in a Vatican City parody referred to as "Popetown". He is charged with being the handler for the Pope who is a complete nincompoop with the emotional and mental maturity of a four-year-old. Father Nicholas must keep the Pope out of trouble, and make sure the general public does not find out that the Holy Father is a drooling idiot. Other characters include a priest who is a sexual deviant, and a trio of corrupt cardinals who secretly run Popetown and attempt to get rich behind the Popes back. These and other elements caused the show to be extremely controversial. The original English-language version of the show features the voices of actor and Popetown writer Mackenzie Crook, Little Britain co-creator Matt Lucas, providing the voice for one of the cardinals, and actress Jerry Hall. Ruby Wax is the voice actor for The Pope. The series was originally commissioned by BBC Three in the United Kingdom, but was dropped from scheduling without a screening in the wake of protests from Roman Catholics. The premiere screened on New Zealands C4 television network on 8 June 2005. Despite never being shown on British television, it was eventually released on DVD in the UK by Revolver Entertainment on 5 September 2005, in Australia by Roadshow Entertainment and in Germany, where it was aired on television, by Polyband. It is also currently aired on several MTV channels, including MTV Latin America, MTV Latvia, MTV Estonia and others. The show was also banned in some countries. 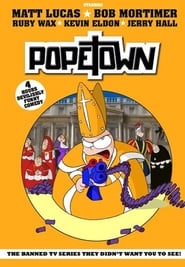 Set in Texas, this animated series follows the life of propane salesman Hank Hill, who lives with his overly confident substitute Spanish teacher wife Peggy, wannabe comedian son Bobby, and naive niece Luanne. Hank has conservative views about God, family, and country, but his values and ethics are often challenged by the situations he, his family, and his beer-drinking neighbors/buddies find themselves in.
TV Show Star Rating : 7.1  Read More

The series focuses on an eccentric motley crew that is the Smith family and their three housemates: Father, husband, and breadwinner Stan Smith; his better half housewife, Francine Smith; their college-aged daughter, Hayley Smith; and their high-school-aged son, Steve Smith. Outside of the Smith family, there are three additional main characters, including Hayley's boyfriend turned husband, Jeff Fischer; the family's man-in-a-goldfish-body pet, Klaus; and most notably the family's zany alien, Roger, who is "full of masquerades, brazenness, and shocking antics."
TV Show Star Rating : 6.2  Read More

Brickleberry National Park is facing closure, but not if the park’s dysfunctional park rangers can help it! “Brickleberry,” an animated half-hour series, follows the crazy bunch of park rangers as they do their worst to keep the park running. Steve (David Herman) has been “Ranger of the Month” every month for years, so he feels threatened when Ethel (Natasha Leggero) is transferred from Yellowstone National Park to help whip the park into shape. Connie (Roger Black) and Denzel (Jerry Minor) are two unique rangers that each bring special skills (or in Denzel’s case, lack of skills) to the job, and Woody (Tom Kenny) is the hapless Head Ranger who puts nothing above his beloved park, except his adopted bear cub, Malloy (Daniel Tosh), who he’s taken in and spoils to death.
TV Show Star Rating : 6.7  Read More