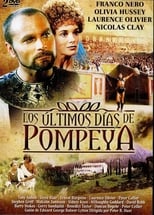 The Last Days of Pompeii

This seven-hour British-Italian adaptation of Edward Bulwer-Lyttons 1834 epic, set against the eruption of Mount Vesuvius in 79 A.D. and previously filmed in 1935, and in 1960 was a vehicle for muscleman Steve Reeves, was trashed by the critics as the campiest of sword and sandal sagas to emerge in years. This despite its reported $19-million price tag, the nobility of its cast that includes Laurence Olivier, Siobhan McKenna and Anthony Quayle, and its rather unspectacular special effects. The central figures are Nicholas Clay as Glaucus, the noble Athenian; Olivia Hussey as the high-born Ione, his love, who is seduced by the Egyptian, Arbaces (Franco Nero), a religious fanatic; Duncan Regehr as Lydon, the champion gladiator; and Linda Purl as the blind slave Nydia, who is torn between Glaucus and Lydon.

Similar TV Shows to The Last Days of Pompeii

Forbidden love blossoms in the city of Pompeii, which until the eruption of volcano Vesuvius in 79 AD, is one of the empire's most powerful cities.
TV Show Star Rating : 6  Read More

Spartacus is an American television series inspired by the historical figure of Spartacus, a Thracian gladiator who from 73 to 71 BCE led a major slave uprising against the Roman Republic departing from Capua.
TV Show Star Rating : 7.9  Read More