Life on Mars is a British television series broadcast on BBC One between January 2006 and April 2007. The series combines elements of science fiction and police procedural, featuring an officer from the Greater Manchester Police who travels back in time after being involved in a road accident. The title is a reference to David Bowies 1973 single "Life on Mars?" An American adaptation of the series was produced by ABC and ran for one season from October 2008 to April 2009. A Spanish adaptation of the series was broadcast from April to June 2009. A Russian adaptation of the series The Dark Side of the Moon was broadcast in November 2012. A sequel to the series, Ashes to Ashes, also referencing another David Bowie song, began airing on BBC One in February 2008, followed by a second series in 2009 and a third and final series in 2010. 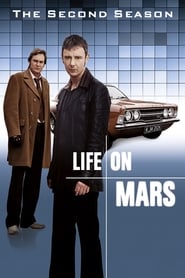 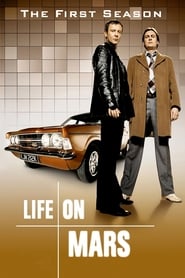 Life on Mars is a science fiction crime drama television series which originally aired on ABC from October 9, 2008 to April 1, 2009. It is an adaptation of the BAFTA-winning original UK series of the same name produced by the BBC. The series was co-produced by Kudos Film & Television, 20th Century Fox Television and ABC Studios. The series tells the story of New York City police detective Sam Tyler, who, after being struck by a car in 2008, regains consciousness in 1973. Fringing between multiple genres, including thriller, science fiction and police procedural, the series remained ambiguous regarding its central plot, with the character himself unsure about his situation. The series also starred Harvey Keitel, Jonathan Murphy, Michael Imperioli, and Gretchen Mol. Life on Mars garnered critical praise for its premise, acting, and depiction of the 1970s but suffered from a declining viewership after its premiere and a two-month hiatus. ABC announced on March 2, 2009 that it would not be ordering a second season. A DVD set of the complete series was released on September 29, 2009.
TV Show Star Rating : 6.4  Read More

Columbo is a friendly, verbose, disheveled-looking police detective who is consistently underestimated by his suspects. Despite his unprepossessing appearance and apparent absentmindedness, he shrewdly solves all of his cases and secures all evidence needed for indictment. His formidable eye for detail and meticulously dedicated approach often become clear to the killer only late in the storyline.
TV Show Star Rating : 7.8  Read More