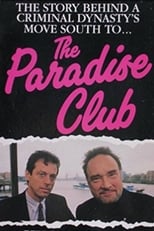 The Paradise Club is a BBC television drama starring Don Henderson and Leslie Grantham as Frank & Danny Kane. Two series were produced and were broadcast between 1989 and 1990. The show focuses upon two brothers, Frank & Danny Kane. Their mother, Ma Kane, is the matriarch of a criminal gang in South London, helped by her son Danny. Frank has become a priest but leaves the church; he inherits The Paradise Club on the death of their mother and returns to London to try and steer Danny away from crime.