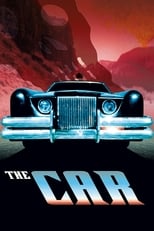 The film is set in the fictional Utah community of Santa Ynez, which is being terrorized by a mysterious black coupe that appears out of nowhere and begins running people down. After the car kills off the towns Sheriff (John Marley), it becomes the job of Captain Wade Parent (James Brolin) to stop the murderous driver.

Similar Movies to The Car

Twin Peaks: Fire Walk with Me

In the questionable town of Deer Meadow, Washington, FBI Agent Desmond inexplicably disappears while hunting for the man who murdered a teen girl. The killer is never apprehended, and, after experiencing dark visions and supernatural encounters, Agent Dale Cooper chillingly predicts that the culprit will claim another life. Meanwhile, in the more cozy town of Twin Peaks, hedonistic beauty Laura Palmer hangs with lowlifes and seems destined for a grisly fate.
Movie Star Rating : 7.3  Read More

John Constantine has literally been to Hell and back. When he teams up with a policewoman to solve the mysterious suicide of her twin sister, their investigation takes them through the world of demons and angels that exists beneath the landscape of contemporary Los Angeles.
Movie Star Rating : 6.6  Read More

A stranger arrives in a little village and soon after a mysterious sickness starts spreading. A policeman is drawn into the incident and is forced to solve the mystery in order to save his daughter.
Movie Star Rating : 7.2  Read More

A determined young woman and a damaged occultist risk their lives and souls to perform a dangerous ritual that will grant them what they want.
Movie Star Rating : 6.2  Read More

Perfume: The Story of a Murderer

Jean-Baptiste Grenouille, born in the stench of 18th century Paris, develops a superior olfactory sense, which he uses to create the world's finest perfumes. However, his work takes a dark turn as he tries to preserve scents in the search for the ultimate perfume.
Movie Star Rating : 7.1  Read More

A group of Confederate soldiers who hole up in an abandoned plantation after robbing a bank, and find themselves at the mercy of supernatural forces.
Movie Star Rating : 5.6  Read More

Harry Potter and the Order of the Phoenix

Returning for his fifth year of study at Hogwarts, Harry is stunned to find that his warnings about the return of Lord Voldemort have been ignored. Left with no choice, Harry takes matters into his own hands, training a small group of students – dubbed 'Dumbledore's Army' – to defend themselves against the dark arts.
Movie Star Rating : 7.5  Read More

In the aftermath of a family tragedy, an aspiring author is torn between love for her childhood friend and the temptation of a mysterious outsider. Trying to escape the ghosts of her past, she is swept away to a house that breathes, bleeds… and remembers.
Movie Star Rating : 6.4  Read More

The haunted Lambert family seeks to uncover the mysterious childhood secret that has left them dangerously connected to the spirit world.
Movie Star Rating : 6.6  Read More