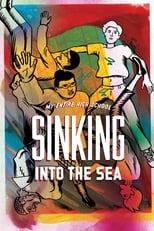 My Entire High School Sinking Into the Sea

From acclaimed graphic novelist Dash Shaw (New School) comes an audacious debut that is equal parts disaster cinema, high school comedy and blockbuster satire, told through a dream-like mixed media animation style that incorporates drawings, paintings and collage. Dash (Jason Schwartzman) and his best friend Assaf (Reggie Watts) are preparing for another year at Tides High School muckraking on behalf of their widely-distributed but little-read school newspaper, edited by their friend Verti (Maya Rudolph). But just when a blossoming relationship between Assaf and Verti threatens to destroy the boys friendship, Dash learns of the administrations cover-up that puts all the students in danger. Hailed as "the most original animated film of the year" and "John Hughes for the Adult Swim generation", the films everyday concerns of friendships, cliques and young love remind us how the high school experience continues to shape who we become, even in the most unusual of circumstances.

Similar Movies to My Entire High School Sinking Into the Sea

Bianca's universe turns upside down when she learns that her high school refers to her as a ‘DUFF' (Designated Ugly Fat Friend). Hoping to erase that label, she enlists the help of a charming jock and her favorite teacher. Together they'll face the school's mean girl and remind everyone that we are all someone's DUFF… and that's totally fine.
Movie Star Rating : 6.7  Read More

Cady Heron is a hit with The Plastics, the A-list girl clique at her new school, until she makes the mistake of falling for Aaron Samuels, the ex-boyfriend of alpha Plastic Regina George.
Movie Star Rating : 7  Read More

Its a Boy Girl Thing

A visit to a natural history museum proves catastrophic for two high school rivals, an overachiever and a jock, when an ancient Aztec statue casts a spell that causes them to switch bodies and see exactly what it's like to walk in the other's shoes.
Movie Star Rating : 6.3  Read More

A socially awkward but very bright 15-year-old girl being raised by a single mom discovers that she is the princess of a small European country because of the recent death of her long-absent father, who, unknown to her, was the crown prince of Genovia. She must make a choice between continuing the life of a San Francisco teen or stepping up to the throne.
Movie Star Rating : 6.5  Read More

Ten years after the first American Pie movie, three new hapless virgins discover the Bible hidden in the school library at East Great Falls High. Unfortunately for them, the book is ruined, and with incomplete advice, the Bible leads them on a hilarious journey to lose their virginity.
Movie Star Rating : 5.1  Read More

Earthquake is a 1974 American disaster film that achieved huge box-office success, continuing the disaster film genre of the 1970s where recognizable all-star casts attempt to survive life or death situations. The plot concerns the struggle for survival after a catastrophic earthquake destroys most of the city of Los Angeles, California.
Movie Star Rating : 5.5  Read More

High school senior Tara is so painfully shy that she dreads speaking to anyone in the hallways or getting called on in class. But in the privacy of her bedroom with her iPod in hand, she rocks out - doing mock broadcasts for Miami's hottest FM radio station, which happens to be owned by her stepfather. When a slot opens up at The SLAM, Tara surprises herself by blossoming behind the mike into confident, "Radio Rebel" - and to everyone's shock, she's a hit!
Movie Star Rating : 6  Read More

Three high school seniors throw a party to make a name for themselves. As the night progresses, things spiral out of control as word of the party spreads.
Movie Star Rating : 6.4  Read More

Bianca, a tenth grader, has never gone on a date, but she isn't allowed to go out with boys until her older sister Kat gets a boyfriend. The problem is, Kat rubs nearly everyone the wrong way. But Bianca and the guy she has her eye on, Joey, are eager, so Joey fixes Kat up with Patrick, a new kid in town just bitter enough for Kat.
Movie Star Rating : 7.4  Read More