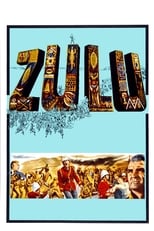 Dwarfing the mightiest! Towering over the greatest!

In 1879, during the Zulu wars, man of the people Lt. John Chard (Stanley Baker) and snooty Lt Gonville Bromhead (Michael Caine) were in charge of defending the isolated Natal outpost of Rorkes Drift from tribal hordes, holding out during an Alamo-like siege until they are overwhelmed, losing the battle, but going down in history as heroes. 150 soldiers defended a supply station against some 4000 Zulus, aided by the Martini-Henry rifle "with some guts behind it". In the hundred years since the Victoria Cross was created for valour and extreme courage beyond that normally expected of the British soldier in face of the enemy only 1344 have been awarded. Eleven of these were won by the defenders of the mission station at Rorkes Drift, Natal, January 22nd to the 23rd 1879.

A burger-loving hit man, his philosophical partner, a drug-addled gangster's moll and a washed-up boxer converge in this sprawling, comedic crime caper. Their adventures unfurl in three stories that ingeniously trip back and forth in time.
Movie Star Rating : 8.4  Read More

Leon, the top hit man in New York, has earned a rep as an effective "cleaner". But when his next-door neighbors are wiped out by a loose-cannon DEA agent, he becomes the unwilling custodian of 12-year-old Mathilda. Before long, Mathilda's thoughts turn to revenge, and she considers following in Leon's footsteps.
Movie Star Rating : 8.2  Read More

An ex-tennis pro carries out a plot to have his wife murdered after discovering she is having an affair, and assumes she will soon leave him for the other man anyway. When things go wrong, he improvises a new plan - to frame her for murder instead.
Movie Star Rating : 7.9  Read More

A ticking-time-bomb insomniac and a slippery soap salesman channel primal male aggression into a shocking new form of therapy. Their concept catches on, with underground "fight clubs" forming in every town, until an eccentric gets in the way and ignites an out-of-control spiral toward oblivion.
Movie Star Rating : 8.4  Read More

A traumatised veteran, unafraid of violence, tracks down missing girls for a living. When a job spins out of control, Joe's nightmares overtake him as a conspiracy is uncovered leading to what may be his death trip or his awakening.
Movie Star Rating : 6.4  Read More

Dave Lizewski is an unnoticed high school student and comic book fan who one day decides to become a super-hero, even though he has no powers, training or meaningful reason to do so.
Movie Star Rating : 7.1  Read More