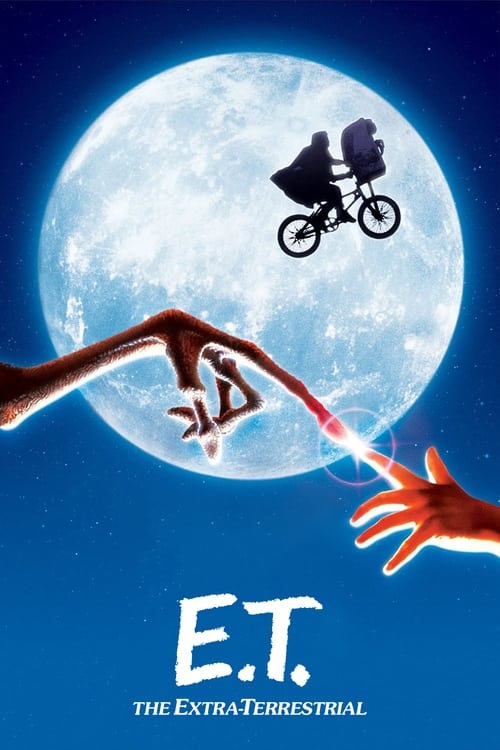 Tagline : He is afraid. He is alone. He is three million light years from home.

Plot : After a gentle alien becomes stranded on Earth, the being is discovered and befriended by a young boy named Elliott. Bringing the extraterrestrial into his suburban California house, Elliott introduces E.T., as the alien is dubbed, to his brother and his little sister, Gertie, and the children decide to keep its existence a secret. Soon, however, E.T. falls ill, resulting in government intervention and a dire situation for both Elliott and the alien. 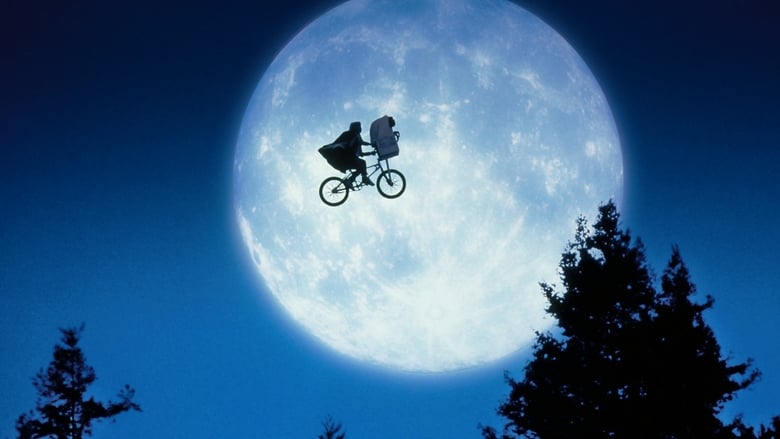 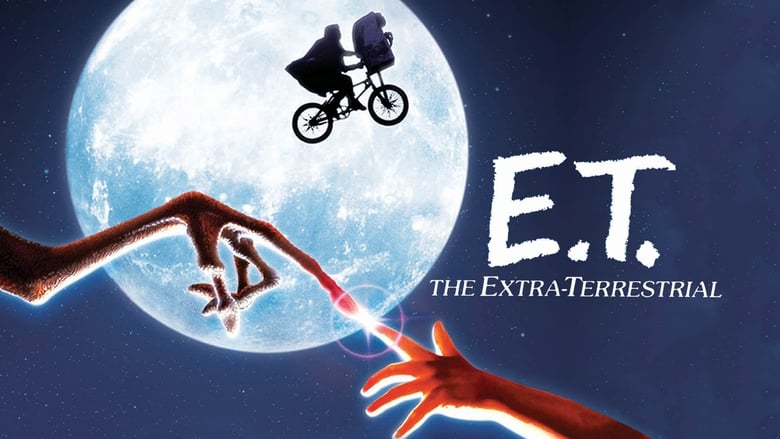 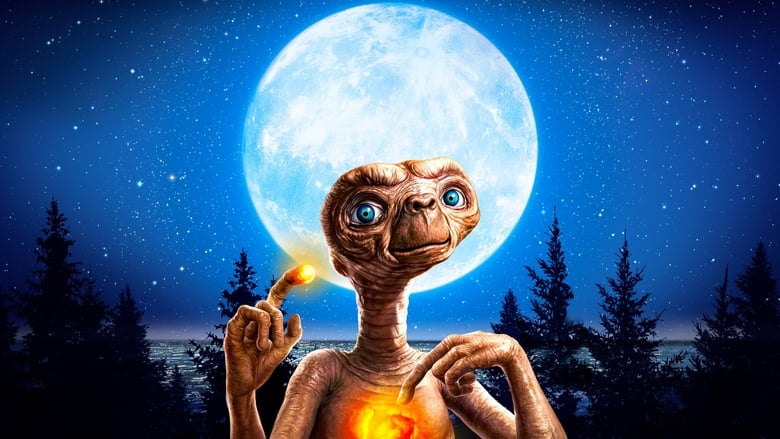 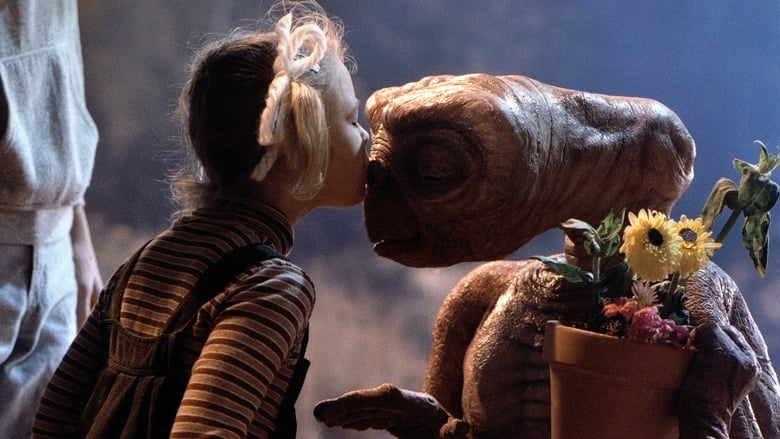 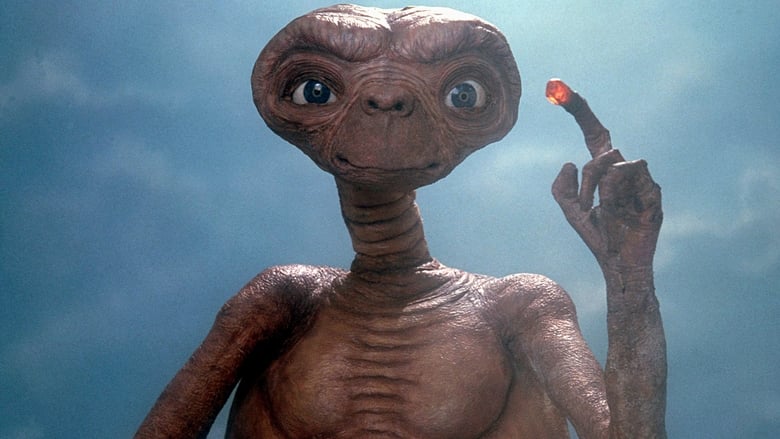 Watched with my wife, the 7th grader, and the kindergartner. I only kind of half watched... It's been a long week. I really wanted to check out my youngest's reactions. Watching this with my 5 y.o. involved answering a lot of questions, but she LOVED it: wide eyed amazement, tears at the appropriate places, and shouts of "YEAH!!!" during the bike scenes. Some of the animatronics are definitely dated, but it's weird seeing these older movies with kids so used to everything being CGI... Even my 7th grader said that some scenes seemed really realistic, which surprised me.

Dream work indeed. An alien is stranded on Earth and a bunch of suburban kids attempt to help him get home. It's amazing to think that such a simple and standard story would go on to become a global phenomenon. E.T.: The Extra-Terrestrial, directed by Steven Spielberg, blasted its way into pop culture and simultaneously became one of the most cherished films of all time. It's not hard to see why, for E.T. appeals to every member of the family, from the joyous set ups as E.T. stumbles around middle America suburbia, to the doses of magic so gleefully constructed by Spielberg's inner child. Those wishing to scratch away at the surface (and there are many who have previously) will find Spielberg affecting his picture with divorce subtexts (his parents divorce was known to upset him deeply), whilst the government "villains" show an astute aside to paranoia of the times and suspicions of political operatives. Dee Wallace, Henry Thomas, Robert MacNaughton, Drew Barrymore and Peter Coyote star. The score, now famous and likely to bring about goose bumps with at the opening bars, is from John Williams, with cinematography coming from Allen Daviau. Shown in the main from a child's perspective, the film is still a wonder that charms and informs on repeat viewings. So much so that as it approaches its 40th birthday, its longevity and all encompassing appeal shows no sign of abating. Something that Spielberg and his crew can rightly feel very proud about. 9/10

Now, we find the rowdy extraterrestrial getting used to life with his new ʻohana. However, a malfunction in the ultimate creation of Dr. Jumba soon emerges, which reinstates his destructive programming and threatens to both ruin his friendship with Lilo and to short him out for good!

It's Halloween night and video store clerk Stan Helsing just got stuck with a last minute request to deliver some videos. With his best friend, his best friend's date, and a smoking hot ex-girlfriend waiting to go to a party, Stan convinces them to take a side trip to Stormy Night Estates for the drop. But the group gets locked inside and Stan discovers he's actually Stan Van Helsing, descendan

When Susan Murphy is unwittingly clobbered by a meteor full of outer space gunk on her wedding day, she mysteriously grows to 49-feet-11-inches. The military jumps into action and captures Susan, secreting her away to a covert government compound. She is renamed Ginormica and placed in confinement with a ragtag group of Monsters...

Two teenage girls try to buy marijuana in the city - where they get kidnapped and brutalized by a gang of psychotic convicts.

Pitch, the mean-spirited devil, is trying to ruin Christmas. Santa Claus teams up with Merlin the Magician and the children of the world in order to save the day!

The Wind in the Willows: Concise version of Kenneth Grahame's story of the same name. J. Thaddeus Toad, owner of Toad Hall, is prone to fads, such as the newfangled motor car. This desire for the very latest lands him in much trouble with the wrong crowd, and it is up to his friends, Mole, Rat and Badger to save him from himself. - The Legend of Sleepy Hollow: Retelling of Washington Irving's story set in a tiny New England town. Ichabod Crane, the new schoolmaster, falls for the town beauty, Katrina Van Tassel, and the town Bully Brom Bones decides that he is a little too successful and needs "convincing" that Katrina is not for him.

Jack Caine is a Houston vice cop who's forgotten the rule book. His self-appointed mission is to stop the drugs trade and the number one supplier Victor Manning. Whilst involved in an undercover operation to entrap Victor Manning, his partner gets killed, and a sinister newcomer enters the scene...

Lilo, Stitch, Jumba, and Pleakley have finally caught all of Jumba's genetic experiments and found the one true place where each of them belongs. Stitch, Jumba and Pleakley are offered positions in the Galactic Alliance, turning them down so they can stay on Earth with Lilo, but Lilo realizes her alien friends have places where they belong – and it's finally time to say "aloha".

Tita is passionately in love with Pedro, but her controlling mother forbids her from marrying him. When Pedro marries her sister, Tita throws herself into her cooking and discovers she can transfer her emotions through the food she prepares, infecting all who eat it with her intense heartbreak.

Four interwoven stories that occur on Halloween: an everyday high school principal has a secret life as a serial killer; a college virgin might have just met the one guy for her; a group of teenagers pull a mean prank, and a bitter old recluse receives an uninvited guest.